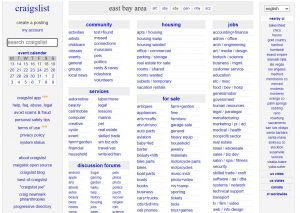 Luong advertised a used car on Craigslist’s San Francisco Bay Area site, in the “Dublin/Pleasanton/Livermore” subsection of the “East Bay” section. This area is sometimes called the Livermore Valley. From Livermore to the closest point in Nevada is about 200 miles. A man in Hayward (also in the East Bay) responded to the ad and arranged to meet at the Castro Valley BART station (Castro Valley is next door to Hayward). On the test drive, Luong robbed the victim at gunpoint.

The federal DOJ prosecuted Luong for, among other things, a Hobbs Act robbery. The jury convicted Luong. The key issue is whether the Craigslist ad affected interstate commerce sufficient to support the federal charges. The Ninth Circuit says yes.

The court explains why Craigslist ads are made in interstate commerce:

By using a website that facilitates interstate commerce (like Craigslist) to advertise a commercial transaction, Luong necessarily affected or potentially affected “commerce over which the United States has jurisdiction.”…Craigslist is an Internet site that facilitates commerce on a national and international level. The evidence presented at the first trial included, for example, that the victim previously sold a motorcycle on Craigslist to a Nevada buyer who traveled from Nevada to purchase and collect the motorcycle in California. The victim further testified that he received inquiries on other vehicles he posted on the Bay Area site from prospective buyers in Nevada, Texas, and Florida. He also testified that he had seen car advertisements posted on the Bay Area site from sellers located in Nevada, Oregon, Texas, Minnesota, and other states. Finally, the jury heard that the Reno, Nevada site contained advertisements from sellers in California and Oregon.

Moreover, despite Craigslist’s stated aspirational goal of facilitating local transactions, the government highlighted at trial that Craigslist sites allow a user to search other localities across state lines. Specifically, local sites provide drop-down menus that include links to sites for nearby cities. For example, the Bay Area site links users to the Reno site, which links its users to the Bay Area site, other California local sites, and at least one site in Oregon. The jury also heard that the investigating agent in this case, while still in the Bay Area, once searched Washington, D.C.’s site for a car to purchase before he was transferred there on long-term assignment. From all of this, and viewing the evidence in the light most favorable to the government, a jury could reasonably conclude that the Craigslist Bay Area site facilitated commercial transactions beyond the local area and operated as an interstate market for used vehicles.

As a backup, the court says that even if Craigslist facilitates only local commercial activity, that activity can, in aggregate, affect interstate commerce.

Collectively, this lets the court reach the interesting conclusion that “Luong’s use of a service like Craigslist had an actual impact on interstate commerce…Luong clearly affected interstate commerce by robbing his victim as part of a commercial transaction facilitated by a website that forms an interstate market for used cars,” even though Luong and the victim both lived in California hundreds of miles from the nearest state border.

The question of whether Congress has the constitutional authority to govern online activity, when the Internet ignores geographic borders, is a venerable one in Internet Law, easily going back to the 1990s. We’ve always assumed the answer is yes, at minimum because of the expansive definitions of what constitutes interstate commerce per the constitutional jurisprudence. Viewed that way, this case’s result is expected and unsurprising. At the same time, Craigslist’s unusual architecture provided one of the more compelling examples of truly “local” activity on the Internet. Perhaps we could find some Internet zones that would avoid this outcome–Nextdoor’s communities come to mind because the content is available only to verified residents of the location–but I don’t see how any open-to-the-public website, like Craigslist, would support a different conclusion than this case. That means Congress can pretty much justify any Internet regulation under its Commerce Clause authority. Let’s hope they use that broad power wisely. 🤣🤣🤣

(FWIW, my Westlaw alerts send me a steady stream of cases involving robberies facilitated by Craigslist. Please please please, if you’re buying or selling on Craigslist, be smart and follow best practices when transacting with a stranger).