This case doesn’t break any new ground, but it’s typical of what I’m seeing. The plaintiffs claim that the retailer Sierra Trading Post (STP) provides misleading comparison prices. STP sought to send the case to arbitration based on its TOU allegedly formed at checkout. I believe this is the relevant UI: 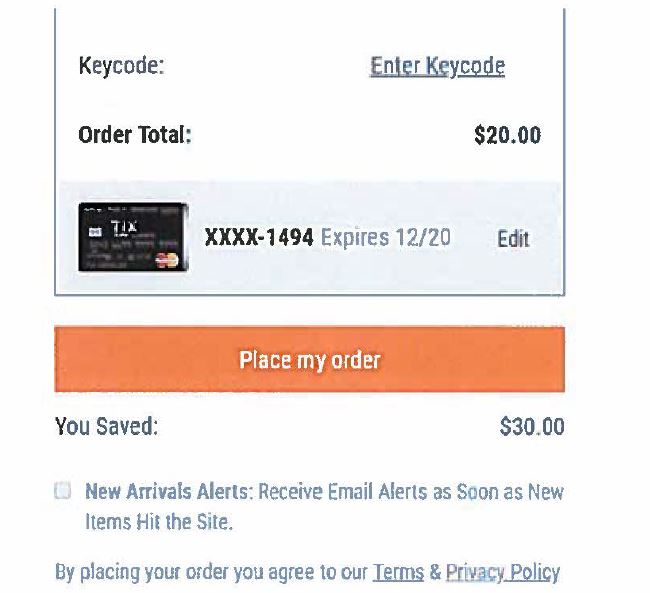 In general, courts try to divide contracts into either clickwraps or browsewraps. A reminder that I only use those terms to mock them for several reasons, including (1) those terms are not robust enough to cover the range of UIs encountered in the field; and (2) the classification does not always help courts reach a conclusion. As the court candidly acknowledges, the “relevant law shows that courts have not been uniform in their treatment of ‘clickwrap’ or ‘browsewrap’ agreements.”

Like so many courts before, this court says this UI isn’t either a clickwrap or browsewrap. Instead, the court calls this UI a “modified clickwrap,” a phrase we’ve seen before. The court says the defendant’s UI sufficiently confers inquiry notice on the plaintiff:

Notably, the user does not need to scroll beyond the “Place my Order” button to find the Consent line, which explicitly states that the user agrees to the “Terms” by placing the purchase order. [cite to Meyer v. Uber] Moreover, the word “Term” in the Consent line, which hyperlinks directly to the TOU, is both capitalized and underlined and thus distinguishable from the surrounding text.

But how does the court know that users wouldn’t need to scroll between order button and the call-to-action? Obviously this screen shot was carefully cropped so it didn’t show the whole page. Indeed, the plaintiff argued that the mobile interface looked different than the screenshot. Though argument might have succeeded, it failed here because the plaintiff didn’t actually make any purchases via the mobile interface.

As a result, the court says the contract was properly formed, and the arbitration clause applies.

This is a good result for the defendant, but boy, this could have easily gone south. Worse, it was so avoidable. The defendant easily could move the call-to-action to above the “place my order” box. I have no idea why it wasn’t placed there in the first place. An extra checkbox saying “I agree to the Terms and Privacy Policy” would take the contract formation process out of the murky “clickwrap” category altogether, virtually ensuring enforceability.

← Ninth Circuit Says LinkedIn Wrongly Blocked HiQ’s Scraping Efforts
And At the End of the Day, the CCPA Remains Very Much the Same (Guest Blog Post) →
Subscribe to Blog via Email
Categories