At this point, many “conservatives” favor government regulation of the editorial practices of Internet companies. As a result, proposals coming from DC “conservatives” that reference “censorship” in their titles almost certainly are designed to embrace, not prevent, censorship. For example, I proposed renaming Sen. Hawley’s “Ending Support for Internet Censorship Act” as “Support for Internet Censorship Act,” because that’s exactly what the bill does. Similarly, with Rep. Gosar D.D.S.’s “Stop the Censorship Act,” I think a proper name would be simply “Censorship Act.” Truth in advertising.

Rep. Gosar’s HR 4027 was introduced in Congress July 25, 2019, but the text didn’t appear in Congress.gov until yesterday (August 14). I do not understand it took 3 weeks for the bill’s text to become public. In the interim, the bill has caused some confusion. When introduced, Rep. Gosar issued a press release but didn’t include the text. Unsurprisingly, the press release wasn’t 100% accurate. That sparked several news reports that responded to the press release but were themselves imprecise because they weren’t grounded in the text.

Now that the text is public, we can finally do a well-informed evaluation. The bill proposes three substantive changes to Section 230(c)(2). First, it would limit the 230(c)(2)(A) safe harbor for filtering/blocking decisions only to “unlawful” content, rather than the current much broader scope of “objectionable” content. Second, it would limit the 230(c)(2)(B) safe harbor for providing filtering instructions only to “unlawful” content. Third, it would create a new safe harbor for providing users with the ability to restrict access to material. I did a redline showing its proposed changes to Section 230(c): 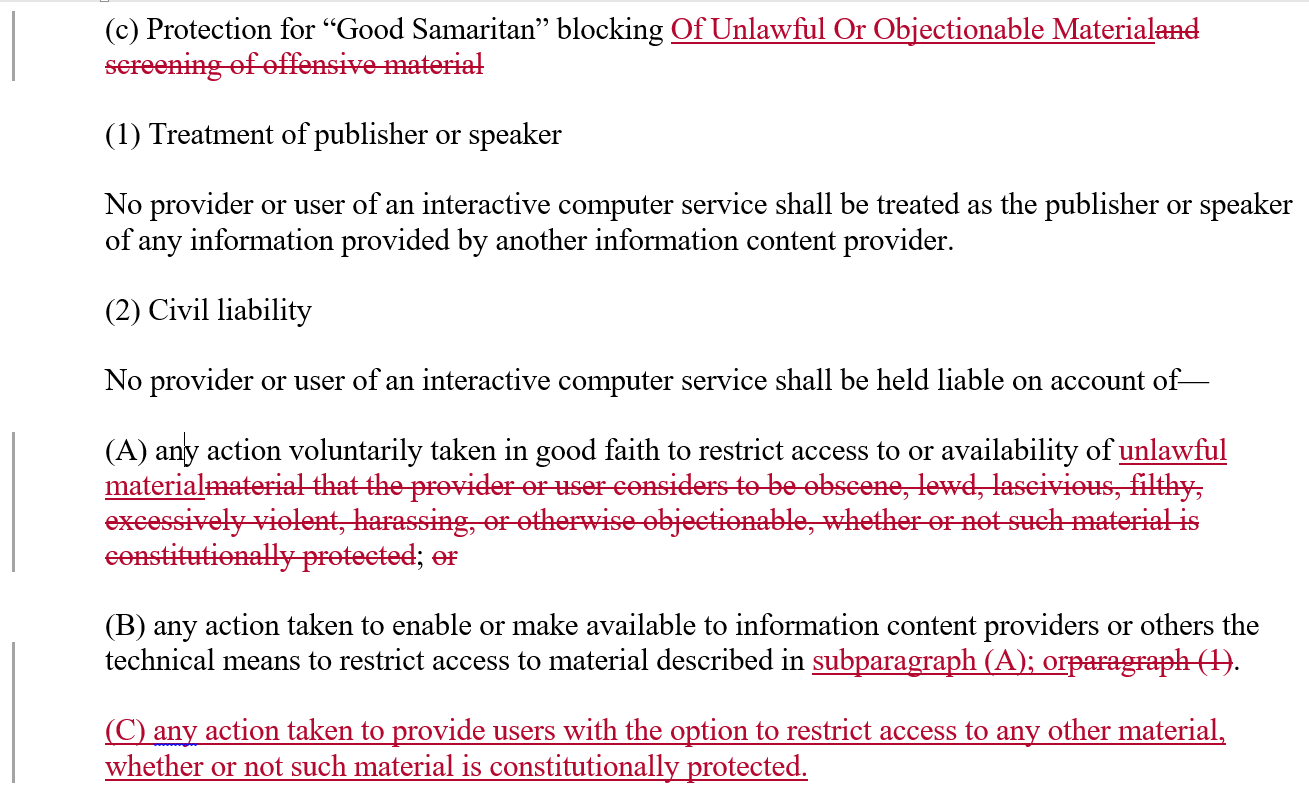 This bill is terrible in many ways. Among other problems, it grossly misunderstands Section 230’s mechanics, its desired policy consequences would be horrible, and it is misdrafted to advance those objectives. Some of the bill’s lowlights:

In the case of removals, the most likely plaintiff is the user whose content has been removed. Those users often don’t have enough at stake to sue, and they will have to navigate around the service’s TOS and its many provisions protecting the service.

Anti-Threat Vendors Rely on Section 230(c)(2)(B), But This Bill Would Eviscerate Their Safe Harbor. While Section 230(c)(2)(A) has faded in importance, Section 230(c)(2)(B) remains a vital protection for anti-threat vendors, such as vendors of anti-spam, anti-spyware, anti-malware, and anti-virus software. Every time these vendors make a classification decision that will block their users’ access to third party software or content, they face potential lawsuits. Fortunately, in the Zango v. Kaspersky ruling from a decade ago, the Ninth Circuit held that Section 230(c)(2)(B) applied to those lawsuits. In practice, that ruling ended lawsuits by spammers, adware vendors, and other producers of threats against software vendors over blocking and classification decisions.

The bill would implicitly overturn Zango v. Kaspersky and instead provide a safe harbor only for blocking “unlawful content.” As a result, vendors who produce software or content that is pernicious/unwanted, but not technically illegal, would have much greater legal leverage to challenge any classification decisions. This has at least two bad consequences: (1) anti-threat software will become substantially less useful to users because they let through more unwanted stuff, and (2) there will be a lot more litigation over classification decisions, which will raise defense costs and make the anti-threat vendors scared to block anyone. So instead of calling this bill “Stop the Censorship Act,” it might be more accurate to call it the “Stop Protecting Consumers from Spam, Spyware, Malware, and Viruses Act.”

Due to the term’s imprecision, it’s hard to judge the scope of the suppressable content that would be consistent with the redefined safe harbor.

Limiting Content Filtering to “Unlawful Content” Would Be Stupid. Let’s assume the bill would limit the Section 230(c)(2) safe harbors only to removing Constitutionally unprotected content. If so, removing pernicious but legal content would no longer get the safe harbor. If Internet services actually changed their behavior due to this reshaped safe harbor, they would be overrun by trollers, spammers, and miscreants, which would crowd out all productive conversations. In other words, this bill seeks to make Internet services look more like 8Chan. Perhaps this bill should be renamed the “I ❤ 8Chan Act.”

What Does It Mean to Give Users “Options to Restrict Access” to Content? The bill proposes a new safe harbor for putting more filtering power in users’ hands. Putting aside the filter bubble risk, on balance that sounds like it could be a good thing.

But what does it mean to give users “options to restrict access”? The press release expressly cites three examples: Google SafeSearch, Twitter Quality Filter or YouTube Restricted Mode (I retained the quirky italicization from the press release).

Wut? Google SafeSearch is on by default, so does this means that Google’s default search always will qualify for the new 230(c)(2)(C) safe harbor even though the SafeSearch routinely blocks and downgrades lawful content?  I don’t know much about Twitter’s Quality Filter or how widely it’s used. Surely the reference to YouTube’s Restricted Mode can’t be right–after all, having his videos restricted triggered Prager University to sue Google (unsuccessfully). Or maybe the drafters didn’t realize that?

All three examples involve coarse filters–essentially, they are either on-or-off. So if a binary on/off filtering tool qualifies as giving users “options” to filter, then what personalization or filtering tool wouldn’t qualify for 230(c)(2)(C)?

Because many services give users options to personalize the content they see in some way or another, 230(c)(2)(C) seemingly could swallow up the rest of the bill and make the changes to 230(c)(A) and (B) functionally irrelevant. For example, because installing anti-threat software or parental control software is a binary “option,” maybe those services gain back via 230(c)(2)(C) everything that they seemingly lost in the proposed revisions to 230(c)(2)(B)…? But it’s hard to say that most filtering software puts true “options” into the hands of users–in virtually all cases, anti-spam software is a binary on/off, so the real filtering power remains in the service’s classification decisions. So if 230(c)(2)(C) is broad enough to pick up binary options, I don’t understand what the drafters think they are accomplishing.

It doesn’t bring me any joy to dunk on a bill like this. Like Sen. Hawley’s bill, it almost certainly was meant as a piece of performative art to “play to the base” rather than as a serious policy proposal. But even as performative art, it highlights how Section 230 is grossly misunderstood by politicians inside DC, and it’s a reminder that modifying Section 230 requires extreme care because even minor changes could have dramatic and very-much-unwanted consequences.

Even if there are merits to taking a closer look at Section 230, proposals like this don’t aid that process. Instead, by perpetrating myths about Section 230 and politicizing Section 230, bills like this degrade the conversation. They move us yet closer to the day when Congress does something terrible to Section 230 for all of the wrong reasons.

[SPECIAL SHOUTOUT TO REPORTERS: If I’m right that Sen. Hawley’s bill and this bill are performative art, not serious policy proposals, you do a HUGE disservice to your readers and the world when you treat the bill authors as credible information sources on Section 230. In effect, you are helping them amplify their messages to their base while polluting the discourse for everyone else. Of course, the bill drafters know you will do this, so introducing a performative art bill buys them an ill-deserved seat at the discussion. They are intentionally weaponizing your compulsion to present “both sides” against you. Don’t take the bait.]

I offered several alternative names for the bill, so I thought it would be helpful to recap them all here: