When does using a competitor’s trademark as a hashtag create a false impression of association? While plenty of cases have assessed whether a company’s use of competitors’ marks in its advertisements constitutes trademark infringement, only a few have specifically scrutinized the use of hashtags. The district court’s opinion in Align Tech v. Strauss Diamond Instruments reflects the extent to which courts struggle with questions about how consumers perceive hashtags on social media.

Plaintiff Align makes Invisalign, a clear plastic alternative to braces. It also manufactures and sells the iTero Element scanner, which creates three-dimensional scans of the inside of a patient’s mouth, and single-use protective sleeves for the intraoral part of the scanner. Defendant Strauss makes the MagicSleeve, a multi-use silicone sleeve designed for use with Align’s iTero scanner.

Strauss markets the MagicSleeve online on various social media platforms, including Instagram, Facebook, YouTube, and LinkedIn. In addition to incorporating Align’s registered trademarks iTERO, iTERO ELEMENT, and INVISALIGN in the text of some of its social media posts, Strauss included Align’s marks among the accompanying hashtags. It also used an image of the iTero scanner lifted from Align’s website in its posts and made admittedly false claims about its product (claiming “25% faster scanning time” without any factual basis). Align sued, asserting several causes of action under the Lanham Act and state law including trademark infringement, unfair competition, and false advertising. I focus here specifically on the analysis of Strauss’s hashtag use.

Strauss defended its use of #itero and #invisalign in its posts by arguing that the hashtags referenced Align’s products, so the court applied the Ninth Circuit’s nominative fair use factors. Under New Kids on the Block, “First, the product or service in question must be one not readily identifiable without use of the trademark; second, only so much of the mark or marks may be used as is reasonably necessary to identify the product or service; and third, the user must do nothing that would, in conjunction with the mark, suggest sponsorship or endorsement by the trademark holder.” Here the court found that Strauss’ hashtag use failed to qualify as nominative fair use both because the ads used more of the marks than was reasonably necessary, and because “in some cases, Strauss used the marks to refer to its own product.”

The court offered the following Instagram post, featuring a nine-step set of instructions for using the MagicSleeve with the iTero wand, as one example: 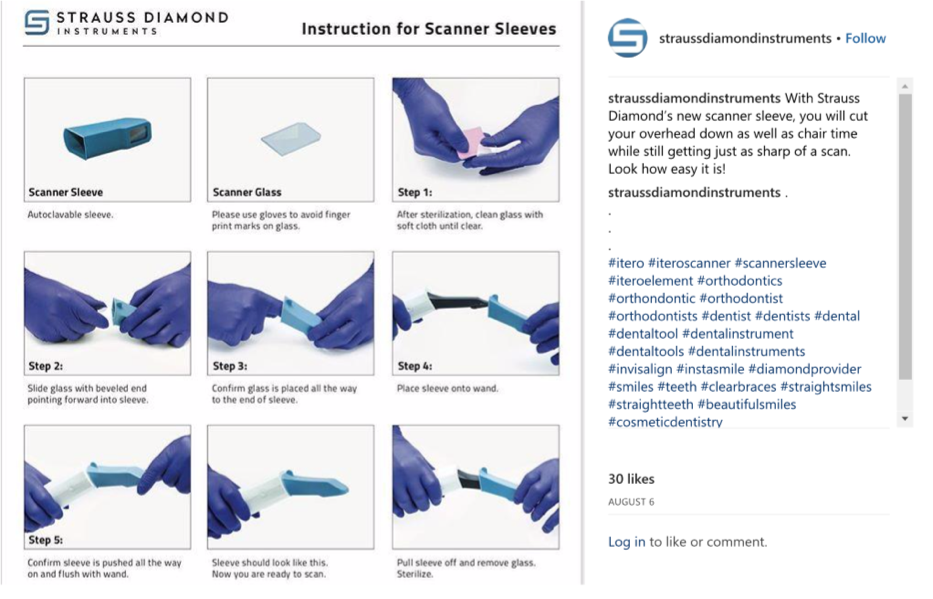 It noted that while Strauss claimed the #itero, #iteroscanner, #iteroelement, and #invisalign hashtags referred to Align’s products, #scannersleeve and #diamondprovider referenced Strauss and Strauss’s product, and the remaining hashtags (#orthodontic, #straightteeth, #cosmeticdentistry, etc.) were simply general dentistry- and beauty-related tags. The court therefore found that the hashtag use failed to qualify as nominative fair use because “[t]hese hashtags are all collectively being used to promote and describe the MagicSleeve. It is not credible to view the hashtags containing Align’s marks as referring to Align’s products (the foundational assumption of nominative fair use) and the other hashtags as referring to the MagicSleeve. They are all together references to the MagicSleeve.”

The assertion that #itero and #invisalign reference Strauss’s product and not Align’s products is perplexing, and the logic that they must be read that way because they’re used in close proximity to the neutral and descriptive hashtags is not persuasive. The “foundational assumption of nominative fair use” is indeed that a defendant uses a plaintiff’s marks to reference that plaintiff’s goods or services as a means to communicate something about defendant’s own goods or services, whether it be compatibility (“our headphones work with Apple products”), comparison (“half the calories of Pepsi—and twice the taste!”), related services (“we repair VWs”), or resale (“shop our gently-used Chanel handbags”). As the Ninth Circuit explained in Cairns v. Franklin Mint, “The nominative fair use analysis is appropriate where a defendant has used the plaintiff’s mark to describe the plaintiff’s product, even if the defendant’s ultimate goal is to describe his own product.”

When Strauss uses iTero and Invisalign, with or without a hash mark, it’s referencing Align’s products in order to describe its own—its MagicSleeve is not only compatible with the iTero scanner, it was explicitly designed as an accessory for it and an alternative to Align’s own sleeves. Most cases assess this threshold nominative fair use question in a straightforward way: is the mark being used in its non-trademark sense, as a descriptor, or in its trademark sense, as a reference to the mark owner? A fanciful mark like iTero or Invisalign cannot be used in the former way­­. After dispensing with that threshold question, courts then consider the more nuanced issues of whether the use is reasonably necessary in the first place, whether the defendant used only so much of the mark as it needed, and whether it did anything that suggested sponsorship or endorsement. Strauss’ hashtags may fall short on the second or third factor, but it’s hard to reconcile with prior case law the assertion that they’re not being used to reference Align’s goods but instead solely to describe Strauss’s.

Moving on, the court finds that Strauss’s deployment of hashtags in the MagicSleeve advertisements exceeds the second prong of the nominative fair use test by using more of Align’s marks than it needs: “none of the hashtags are reasonably necessary to identify Strauss’s product.” That assertion seems fair enough for ads that reference Align’s products in the main text, like the LinkedIn post (below) that proclaims “If you are an iTero user, be prepared to cut your overhead down. Our brand new scanner sleeve is autoclavable and allows for faster scanning time.” (The court characterizes this text as “a classic case of nominative fair use,” and Align reportedly does not challenge it.) For ads that don’t mention iTero anywhere else, though, do hashtags naming the compatible product truly constitute “too much” use? 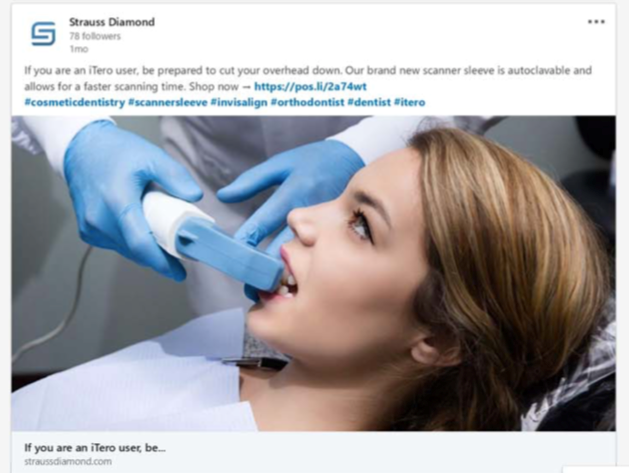 The real problem, the court goes on to say, is that the hashtags don’t tell consumers what the MagicSleeve is for—“you can’t read the hashtags and figure out that this product is the sleeve that goes on the wand of an iTero scanner. All the reader can glean from the hashtags is an implied association.” In other words, Strauss’s use succeeds in creating a misleading association while it simultaneously fails to do what nominative fair use doctrine was designed to enable: describe its product’s purpose. To further emphasize why the hashtags are unnecessary, the court recommends imagining a version of each ad with and without the hashtags and comparing their effectiveness: “Does the version with the hashtags better identify Strauss’s product? No.”

The opinion raises (or begs) some intriguing questions around hashtag use and perception. The court seems to presume a set of hashtags appended to a post must all serve a consistent purpose; it follows that #itero cannot constitute nominative fair use if it appears in the same string with generic terms like #scannersleeve and #dentist. But consumers on social media are accustomed to seeing a variety of tag types accompanying both commercial and non-commercial content. Many likely understand that hashtags serve different purposes, often simultaneously—they can identify a post’s topic, emphasize content within the post, introduce new concepts, connect the post with a broader ad campaign or social media trend, ensure it appears in searches by those seeking out a particular topic or phrase, group posts by producers with posts by consumers who use the same hashtag, and more. In fact, Strauss’s Vice President even admitted that the company included Align’s marks as hashtags in its Instagram post “[m]ost likely because it has a high following.” (Whether “it” refers to the hashtag or Align itself is unclear from the opinion.) So to say flatly “the hashtags don’t serve an identification function” because nearby hashtags like #dentist and #beautifulsmiles don’t identify Strauss’s or Align’s products perhaps underestimates consumers. While the context of an allegedly infringing use always matters, and other courts have wrestled with the question of whether a hashtag like #fraternitycollection, #publicimpact, #WGACAchanel, or #cloudpen created a false association, those decisions did not rest as heavily on the role played by the surrounding hashtags. Survey evidence would be illuminating here, as the factfinders in Align v. Strauss—as in most cases that involve trademarks as hashtags—rest their decision on assumptions about consumer perception based on their own experience and impressions, which may not be representative of the relevant consumers (here, orthodontists and the members of their staff who purchase dental equipment).

Almost a decade ago, in Toyota v. Tabari, the Ninth Circuit said that if a “nominative use does not satisfy all the New Kids factors, the district court may order defendants to modify their use of the mark so that all three factors are satisfied; it may not enjoin nominative use of the mark altogether.” But when the district court held that Strauss’s use of Align’s marks did not satisfy the nominative fair use requirement, it broadly enjoined Strauss “from infringing Align’s registered marks in iTero, iTero Element or Invisalign” without further detailing how Strauss could continue to market its iTero-compatible product without infringing. That may be because Strauss had already ceased the uses of Align’s mark to which Align objected by the time of the litigation, so the injunction at that stage was intended merely to maintain the status quo. But given the rise in advertising via social media and the broad use of hashtags to organize, draw attention to, and punctuate posts, a more detailed injunction that specified exactly which kinds of uses the court believes to be barred would likely have been appreciated by advertisers across the country.

Though the Seventh Circuit botched the application of that legal standard in that case, it’s a helpful standard here. Did Strauss use hashtags in a way calculated to deceive consumers? In context, I think the answer is obviously no. The trademark use seems designed to help, not deceive, consumers because of (1) the product compatibility, which can be explained only by referring to Align’s trademark, and (2) the mix of hashtags that include generic terms, signaling that all of them are were intended to function as search keywords. (Perhaps millennials actually read and digest a long string of hashtags like the ones at issue here, but they are visually uninteresting and impenetrable to this Gen Xer). I might see it as a closer question if the defendant had used only the third-party trademark as a hashtag; at that point, though the search keyword effect would still be clear, I’d like to know more about how consumers conceptualized that usage.

I hope courts sort out the hashtags-as-search-keywords issue before they mess up the jurisprudence too much!