After 1908, beleaguered Chicago Cubs fans waited 108 long years for their team to win the world series again. And Grant DePorter, whose application to register #MagicNumber108 as a trademark for shirts was at issue in a recent TTAB decision, is one of the most hardcore Cubs fans of all. DePorter is the President and Managing Partner of a group that owns seven restaurants, including a Chicago steakhouse named for the late Hall of Fame baseball announcer Harry Caray, and the Chicago Sports Museum, whose memorabilia includes the infamous “Bartman ball” that Deporter bought for $113,824.16, publicly destroyed, and cooked into spaghetti sauce in an effort to lift the Curse of the Billy Goat. DePorter even co-authored a book on Cubs-related numerology, Hoodoo: Unraveling the 100 Year Mystery of the Chicago Cubs, which argued that a string of coincidences involving the number 108 revealed it was the Cubs’ destiny finally to win another series.

That’s why DePorter coined the hashtag #MagicNumber108 and then applied to register it with the USPTO. But trademark law doesn’t care who coins a phrase; it only cares who uses it in commerce first as a source indicator. For a trademark to be protectable, consumers must perceive it as a trademark. That perception depends on several factors, including the type of matter the mark comprises and the way in which the producer uses it.

As I’ve previously argued, tagmarks—hashtags in which producers assert trademark rights—are particularly likely to pose challenges for owners seeking to establish protectability, because they often fail to function as trademarks. “Failure to function” is when matter isn’t understood as a mark by the public, usually because it isn’t being used in a mark-like way. Rather than being featured prominently in traditional trademark spots, like on the tag sewn into the inside of a shirt, the sign for a restaurant, or the packaging for a grocery item, tagmarks often appear solely online or are used ornamentally on the front of hats and t-shirts.

DePorter’s use, demonstrated in the specimen he submitted to the USPTO, fits that description to a T: 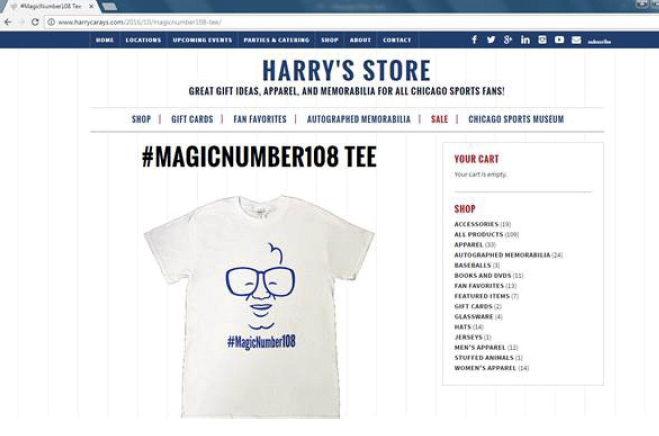 But the TTAB, in affirming the examining attorney’s refusal to register the mark, never used the word “ornamental.” It relied predominantly on another type of failure to function—a doctrine the USPTO calls “informational matter” or sometimes “incapable informational matter.” Examples of matter held merely informational include ONCE A MARINE, ALWAYS A MARINE for clothing; DRIVE SAFELY for automobiles; I ♥ DC for bags; THINK GREEN for paper products; PROUDLY MADE IN USA for electric shavers; and FRAGILE for labels and bumper stickers. Informational matter typically refers to slogans, catchphrases, and expressions consumers are “accustomed to seeing used in everyday speech by a variety of sources,” and such matter is thus unlikely to be capable of indicating a single source. As the TTAB notes in DePorter, “The more commonly a term or expression is used, the less likely that the public will use it to identify only one source and the less likely that it will be recognized by purchasers as a trademark.”

Just 19 days before the TTAB issued its (precedential) decision on #MagicNumber108, it issued a similar (nonprecedential) decision on an intent-to-use-based application to register #covfefe for apparel in In re Gillard. The Board reproduced some of the Examining Attorney’s exhibits, including Trump’s original (ultimately deleted) tweet about “press covfefe,” his follow-up tweet referencing it, and a small sample of the vast number of memes, articles, and social media posts discussing it. As the applicant in that case pointed out, it was unusual for the USPTO to deem a totally made-up term—the kind we might typically categorize as fanciful—as informational matter akin to DRIVE SAFELY and PROUDLY MADE IN THE USA. So-called informational phrases are usually treated as unprotectable because they’re so commonplace as to become incapable of housing source significance. But in the viral explosion that followed Trump’s first use of what was probably a typographical error, the nonsense word became “a verbal Rorschach test” onto which producers and consumers could “project any meaning they wish.”

DePorter made the same argument about #MagicNumber108 that Gillard did about #covfefe—unlike “slogans or sayings which are…‘old and familiar’ or ‘used in everyday speech,’” he claimed that #MagicNumber108 is arbitrary or fanciful as a trademark for shirts. (“Applicant [claims his] mark is a completely arbitrary and fanciful mark which Applicant made up, and which, upon information and belief, never existed at any time in the entire history of the world.”) But as the TTAB reiterates in both cases, whether the relevant public will perceive matter as a mark is the ultimate question for protectability, and the widespread use of both hashtags makes each more likely to fail to function.

In support of their assertion that #MagicNumber108 is purely informational, the Examining Attorney cited numerous social media posts that employed the hashtag to express affiliation with or support for the Chicago Cubs and their World Series win. When members of the public tagged tweets or photos with #MagicNumber108, the Examining Attorney emphasized, they were not referencing any particular goods originating with DePorter. The proposed mark was therefore a common phrase that consumers were accustomed to seeing from a variety of sources, and not one that would be understood as a source indicator when used in connection with goods.

The Board agreed with the Examining Attorney and went on to cite the TMEP more broadly, asserting that “where a hashtag is used as part of an online social media search term, it generally serves no source-indicating function, because it ‘merely facilitates categorization and search.’” But the USPTO has granted registration for hundreds of tagmarks, many of which had already gained traction as non-source-indicating hashtags on social media when they were registered. A few examples include #TBT for wine, #famous for cigars, #NoLaLove for jewelry, #TheSelfie for photo equipment, #WineLover for t-shirts, #chillax for toiletries, and #9RGNG—a frequent fan reference to the San Francisco 49ers roughly analogous to #MagicNumber108—for apparel.

Why, then, were those hashtags deemed capable of functioning as trademarks while #MagicNumber108 was not? The Board gestured in a general way toward the idea that DePorter, in addition to seeking registration for a phrase incapable of serving as a source indicator, also failed to use it in a trademark way, citing precedent for the proposition that “To be a mark, the phrase must be used in a manner which indicates to purchasers or potential purchasers a single source or origin for the goods.” Toward the end of the opinion, the Board acknowledged that “Applicant’ own use [was] consistent with” the “widespread, informational” use of #MagicNumber108 to reference the Cubs. But the Board never explicitly addressed the use DePorter made either on the tee-shirts or on the website offering them for sale. It rested its holding squarely on the informational matter doctrine, when it seems to me that DePorter’s failure to use the matter in a trademark way played a key role in the mark’s overall failure to function.

I’ve argued that the USPTO should use a finer filter when considering whether applications claim marks that fail to function because of how they’re used, including but not limited to tagmarks. But it’s possible for hashtags to function as trademarks, especially when they’re taken offline and featured very prominently on goods or services. It seems possible that #MagicNumber108, used as the name of a restaurant or a brand of tanning lotion, could function as a mark. But here, as demonstrated in the specimen, DePorter sought protection for a commonly-used hashtag and he failed to use it in a trademark way. (As I argue in a forthcoming article, the less a mark inherently looks like the kind of matter people will expect to be a mark, the more indicia of use are necessary to ensure consumers will perceive it as a mark.) DePorter sits at the intersection of two types of failure to function, informational matter and use-based failure to function. The Board foregrounded the former and downplayed the latter, but I’m thrilled to see a decision that raises awareness about how the two issues interact in the age of social media.