[Eric’s introductory note: I have made a personal life choice to ignore the entire Kardashian enterprise and their constant and often faux drama (except that I have occasionally mocked the Kardashians in my law school exams). I’ve decided that life is short and I should invest my limited energy and attention only into people who truly deserve such a precious resource, and none of the Kardashians, or anyone in their orbit, come close to clearing this standard. As a result, before today, the term “Kardashian” has only appeared on the blog 3 times out of over 3,300 posts, and never as the central focus of a post. That streak ends today, but for good reason. The Kardashian drama factory is at the epicenter of a rare and fascinating legal dispute over emoji ownership. That’s compelling enough that I’m holding my nose and handing over the blog reins to emoji law expert Gabriella Ziccarelli to grok the dispute.] 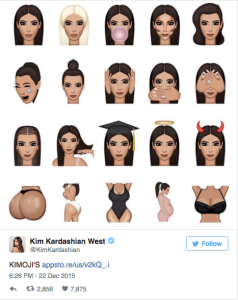 Do not let anyone tell you there is not any money to be made in the business of emojis: just ask Kim Kardashian West.  Her $1.99-a-download Kimoji app featuring various Kim-related emoji  (“Kimoji”) has grossed millions to date.  Following the app’s initial release in December 2015, users were downloading the app at a voracious rate of 9,000 downloads per second, resulting in the Apple App store temporarily crashing.

Now, an individual named David Liebensohn is claiming Kimoji was his multi-million dollar idea –at least $300 million in damages to be exact – in a recent lawsuit filed in Oklahoma federal court against both Kim Kardashian West and her company, Kimsaprincess Inc.  Liebensohn v. Kim Kardashian West, Case No. CIV-19-137-C (complaint filed Feb. 12, 2019). Liebensohn’s complaint alleges claims of breach of a partnership agreement, breach of fiduciary duty, unjust enrichment, and fraud against Kardashian West.

According to the complaint, David Liebensohn, Narayan Shankar, and Daniel Rice founded their company App Social LLC in 2014.  App Social released a number of social media-related product lines, including their “Wall Street” and “sexy” emoji sets and an application called CensorGram that protected users’ social media accounts from bullying and online trolling.

The agreement was a verbal one.  However, there’s little logic in relying on a verbal agreement encompassing a purported major business partnership in the first instance.  Partnership arrangements are complicated and inherently risky (see, e.g., this post), and partners benefit from negotiating and memorializing the terms of the partnership in writing.  Because partnerships typically place unlimited personal liability on each partner for company debts, it’s essential to carve out the obligations and the rights of the partners in forming the partnership agreement. What’s even more mind boggling here is the Plaintiff’s decision to bring a lawsuit alleging breach of a verbal partnership “agreement” – without pleading any facts that suggest the elements of a verbal agreement had been met, including offer, acceptance, exchange of consideration, and most importantly certainty of terms.  Based on the pleadings the terms of the verbal agreement were, at best, preliminary and left a lot up to question (e.g., who would own the intellectual property that resulted from the partnership).

On August 14, 2014, the complaint alleges Kardashian West asked if the App Social team filed the KIMOJI trademark application.  Because the team had not, Kardashian West proceed to file the trademark for KIMOJI – listing only Kimsaprincess, Inc. as the sole owner.

The complaint alleges one day after filling the KIMOJI trademark, Kardashian West, through her attorney Martin Singer, sent the App Social team a letter stating the App Social team caused Kardashian West emotional distress and defamation in excess of $5 million.  [Attorney Martin Singer, protector of the stars, is known for his aggressive tactics.  Singer has a reputation for doing whatever it takes to make famous people’s problems disappear.] Although a copy of the letter was not attached, Liebensohn claims the letter stated Kardashian West suffered these damages as a result of a screen shot she received from one of the App Social founder’s acquaintances – the screen shot allegedly contained personal information about Kardashian’s use of the App Social CensorOut [the successor name for CensorGram] app that had been shared with “all of Chicago.”

The letter offered the App Social team a release from a $5 million lawsuit if they agreed to walk away from future development of Kimoji. (Again, no copy of this letter was attached to the complaint). Liebensohn claims Kardashian West was aware of the screen shot she used to justify cancelling the partnership before the July 28th meeting set up to establish the partnership agreement terms. Liebensohn claims this is indicative of Kardashian West’s lack of intention to follow through on the partnership in the first place.

Mr. Libensohn refused to sign the August 15, 2014 release.  It’s unclear, however, if the other founders of App Social signed the release.

The Liebensohn lawsuit raises a number of the legal issues we’ve previously discussed with regard to emojis.

Noticeably, Liebensohn does not raise any intellectual property infringement claims against Kardashian West.  But at its core, Liebensohn’s allegations insinuate that the Kimoji emoji set was a derivative work of App Social’s proprietary emoji sets. This raises some complex legal issues.

As an initial matter, this lawsuit raises issues regarding proprietary, not Unicode-defined, emoji. Unicode emoji refer to the emoji the Unicode Consortium assigns a unique number, a black-and-white shape outline, and a short description to in such a way that enables the emoji to be recognized across platforms.  The emoji you see on your keyboard when texting are platform implemented versions of the Unicode emoji.  On the other hand, proprietary emojis are platform- or, in the case of branded emoji like Kimoji, source-specific.  The App Social and Kimoji emoji sets at issue in this case are proprietary emoji because they are not based on the Unicode-defined emoji.  The Unicode Consortium does not adopt proprietary emojis that are covered by third-party intellectual property, such as the Kimoji or AppSocial’s emoji set.  (For more on intellectual property and emoji, check out the article Eric and I co-authored on the topic).

Now that we’ve set up some background, let’s dive in to the intellectual property issues at play in the Liebensohn lawsuit. From an intellectual property perspective, if the App Social emoji sets were used to distinguish goods and services in the marketplace, they can be protected as trademarks.  Nothing in the complaint suggests that App Social used the emoji sets in this context.  Providing free emoji sets that users can incorporate into messages typically isn’t a “use in commerce.”

Kardashian West’s use case, however, of the Kimoji are a classic example of how emoji can be utilized as a use in commerce.  Not only was the app a paid one, but a number of the most popular Kimoji were transformed in to tangible products – from phone cases to pool floaties. Even if App Social had used their emoji sets in commerce and the emoji sets were eligible for trademark protection, a claim of trademark infringement against Kardashian West’s Kimoji may not stand since multiple parties could have coexisting trademark rights in the same emoji symbols for different classes of goods.

Additionally, to the extent App Social’s emoji sets reflect significant creative judgments, Liebensohn may be positioned to claim copyright protection in those emoji sets. And even if the Kimoji set appears to be a derivative work of the App Social emoji sets, there is still an inherent issue in that the set (prototype or otherwise) is based on Kardashian West’s likeness.

Even if the court were to find that the Kimoji emoji set was a derivative work of App Social’s emoji sets, although a level of creativity may be involved the derivation from the original would primarily be based on the use of Kardashian West’s likeness. The Kimoji emoji set depicts individual faces and other attributes uniquely associated with Kardashian West and her family. Ultimately, App Social would need the consent of Kardashian to use and monetize the Kimoji on its own even if the court determined App Social to be the rightful owner.

Intellectual property issues aside, this lawsuit highlights the financial value in monetizing a proprietary emoji set and the importance of clearly delineating and memorializing ownership of intellectual property rights in collaborations related to emoji sets.  In this instance, the App Social team could have (and should have) negotiated a written agreement with guidelines on the contributions and obligations of both parties in the partnership and development of the Kimoji set, licensing language for any existing intellectual property provided to Kardashian West, ownership language surrounding the Kimoji set and any derivative works of the set, and a royalty scheme for products sold using the Kimoji set.  As we continue to explore the many ways that emoji can be monetized, we anticipate there will be more clauses surrounding the ownership or development of emoji in the form of license agreements, partnership agreements, and/or consulting agreements.