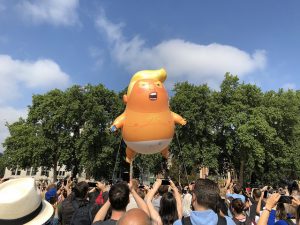 [Over the weekend, a reporter asked me to provide up to 300 words about Trump’s weekend tweetstorm threatening to regulate social media provider due to their alleged bias against conservatives. In light of subsequent events, it’s now clearer that Trump was rage-tweeting to deflect attention from the new revelations that were imminent. Still, I’m sharing my brief thoughts about the tweetstorm FWIW.]

As he does daily, Trump made a factual claim without credible evidence. Beyond anecdotes (of which there are many on all sides of the political spectrum), there is no evidence that social media providers are systematically biased towards any political ideology. Instead, Trump’s tweetstorm is consistent with his standard misdirection tactic of creating a fake crisis and portraying himself as the savior. He is trolling us. Again.

Social media providers are protected by the First Amendment’s Freedoms of Speech and Press. This isn’t a close question. Thus, even if social media providers were biased against conservatives (and there is no evidence to support this), they would be fully permitted to do so–just like the Constitution protects Fox News’ or Breitbart’s strong editorial biases.

As a result, any action Trump might take against social media providers would be clearly and unambiguously unconstitutional. Indeed, Trump’s tweets prove that he seeks to advance one viewpoint over others. That’s literally the most fundamental way the government can violate the First Amendment.

Sadly, Trump has shown zero respect for the Constitution, so it wouldn’t surprise me if his administration tries to punish social media providers. These actions would be unconstitutional and should fail in court eventually. Until then, these unconstitutional actions would create substantial chaos and impose high costs on social media providers to vindicate their rights. That’s where our country is today–undertaking costly and wasteful efforts just to preserve the status quo.

← “Material Support for Terrorists” Lawsuit Against YouTube Fails Again–Gonzalez v. Google
California Lawmakers Want a Study of Fake News (If Someone Else Pays for It) →
Subscribe to Blog via Email
Categories