Trolling the Internet for Photos Creates Copyright Headaches for Ad Agency (and the Advertiser)–Laspata v. Rimowa

Laspata is “a boutique creative marketing agency” that charges a lot of money. For its client, Laspata created a 1920s-themed “lookbook” called “Speechless” that riffed on the Academy Award-winning movie The Artist.

Rimowa makes luggage priced above my budget. Meire is a German ad agency retained by Rimowa. Rimowa asked Meire to create a lookbook called “The Journey,” themed on 1920s air travel. Meire did what any good ad agency does and trolled the Internet looking for photos. This process captured several of Laspata’s photos. Meire then created collages using these found photos and photos of Rimowa’s luggage, including 4 collages that included photos from Laspata. Rimowa also did a “behind-the-scenes” video of the lookbook photoshoot (because watching ad agencies cut-and-paste photos from the Internet is pretty fascinating viewing?). Laspata’s photos also showed up in the video.

Laspata sued Meire and Rimowa for copyright infringement. The court holds that the substantial similarity test doesn’t support either side as a matter of law:

as to the photographs at issue, certain aspects of the Laspata photographs are unprotectable scenes-à-faire that constitute stock elements of the 1920s, classic Hollywood aesthetic. However, many similarities between the Laspata and Meiré photographs do not involve such unprotectable elements, such that a reasonable jury could find that the alleged copies are substantially similar to the Laspata originals. At the same time, these similarities are not so encompassing as to persuade the Court to rule that the works are substantially similar as a matter of law.

This tees up the case for trial.

Here are the images at issue:

Man and Woman in Director’s Chairs

Certain commonalities between the Laspata and Meiré images are unprotectable scènes-à-faire. The leading man and ingénue are a classic Hollywood trope, as is the Jack Russell terrier, who appeared in The Artist and evokes Asta, the canine star of The Thin Man movies and other movies of the era. Scenes of movie personalities in director’s chairs are likewise pervasive stock images of the milieu. But a reasonable jury could find that other similarities are protectable, such that the “total concept and overall feel” of the two images is the same. For instance, the composition of both images is the same — a man on the left and a woman on the right, each seated and looking over the back of a tall director’s chair, with a Jack Russell in the foreground on a low director’s chair, all surrounded by props and against a fake backdrop. In both images, the two human models are resting an elbow on the seat back. The other items on the set — crates, film reels, and, in the Meiré image, the Rimowa luggage — are arranged similarly to frame the director’s chairs. Both images employ a fake backdrop, evoking a vintage look, though one is of a city skyline at night and the other is of the Hollywood Hills in the daytime.

But there are also noticeable differences: 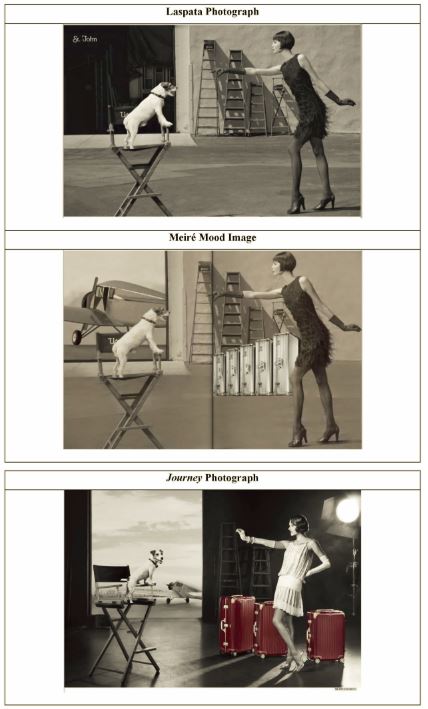 Scènes-à-faire in this second pair of images include the woman in a flapper dress, the Jack Russell terrier on a director’s chair, and the background, which in both images evokes a classic studio lot. Similarities that may be protectable include the general positioning of objects in the images, with the dog on the director’s chair to the left, facing the woman on the right with its forelimbs resting on the seat arm. The woman in both images extends an imaginary treat to the dog with her right hand, standing with her left arm back and her left leg bent (although the women are not identically posed). Both images frame the dog with a more distant background and have ladders against the wall in the top right quadrant of the image.

But the two images differ in ways such that a reasonable jury could find that they are not substantially similar. For instance, the lighting and tones in the images are almost reversed. The models in the Laspata image are outside a warehouse in the daytime. On the top left quadrant of the image is the entrance to a dark warehouse. The woman is dressed in black or dark colors. The model in the Meiré image is inside a dark warehouse or hangar, backlit by the daylight coming through the entrance to the building on the top left and a studio light on the right which casts long shadows in the image. The woman is dressed in white or light colors. The overall effect is that the Meiré image is more dramatic. 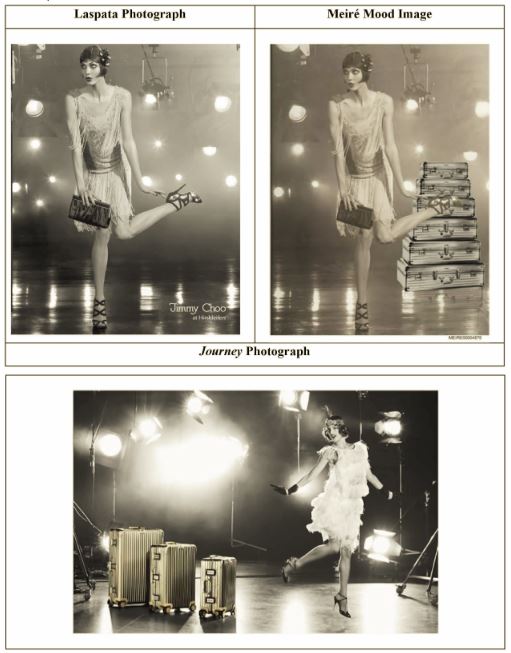 While the image of a flapper dancing on a stage is a scène-à-faire, reasonable jurors may differ on their view of other aspects of the two images, and thus whether or not they are substantially similar. For example, the women in both images wear light-colored, fringed, sleeveless dresses with short skirts; dark strappy stilettos; and head accessories–all typical of the era but not required to evoke it. Both women are illuminated from behind by a number of stage lights that appear as bright spots in the upper two-thirds of the frame, with a shiny reflective floor in the bottom third, and the light diffusing through smoke in the background. But in the Laspata image, there are more stage lights, which appear rigged to the ceiling, than in the Meiré image, in which fewer lights are mounted on stands. The lights in both images reflect onto the stage, but the stage in the Laspata image is more heavily lacquered, creating the effect of light on placid water. 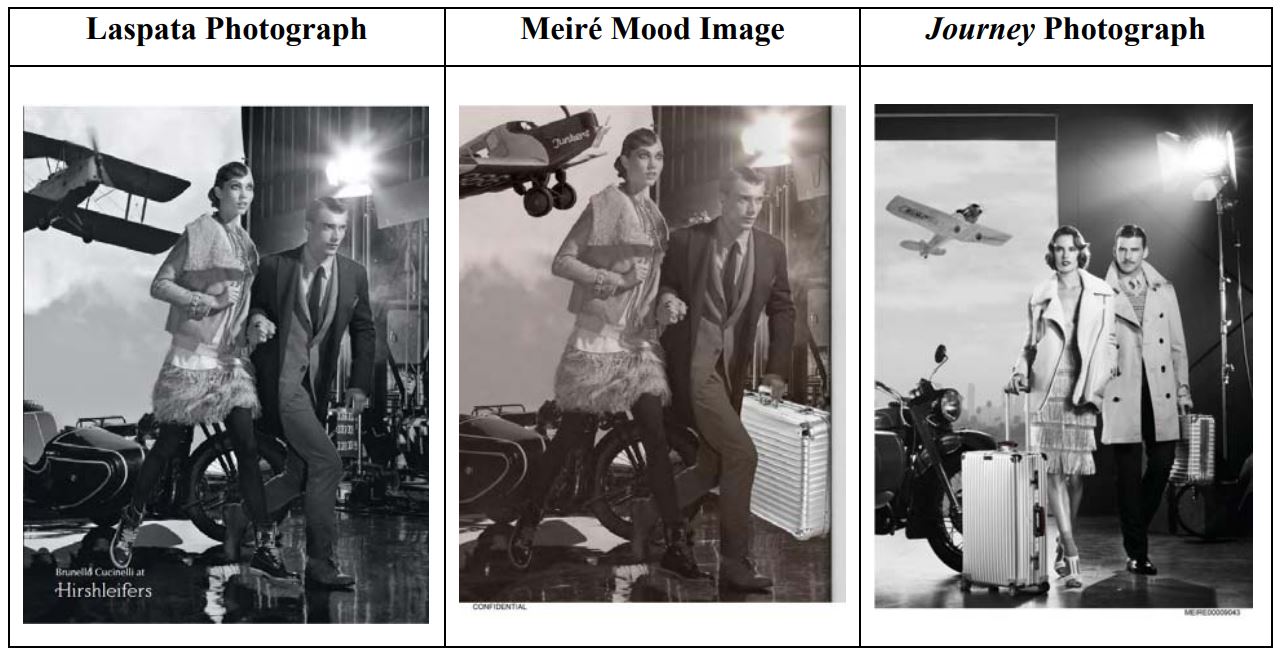 Certain common aspects of these images can be considered scènes-à-faire: the outfits and hairstyles, and the vintage airplane and motorcycle. But the images contain other notable similarities and differences that may lead reasonable juries to disagree as to substantial similarity. The arrangement of the objects in each image is unusually similar: The airplane is in flight to the left, visible through the opening of the hangar, which occupies most of the left half of the image. The couple and the motorcycle are positioned similarly, with the motorcycle behind the couple to the left, and the woman to the left of the man. Both images have what appears to be a stage light behind and to the right of the couple, beaming light toward the center of the shot. But the two couples have different demeanors, materially differentiating the mood in each shot. In the Laspata image, the couple looks away from the camera and appears to be running deeper into the hangar, toward the right side of the shot, apparently away from the airplane. In the Meiré image, the couple is walking toward the camera at a leisurely pace, carrying luggage, as if they had just arrived from a flight.

To me, none of these photos are particularly close to infringing. The second and third examples, in particular, resemble the original only very, very superficially. Those two should have been dismissed on summary judgment. But even the first and fourth examples aren’t that close. If Meire hadn’t cut-and-paste the photos from the Internet, I think the court likely would have dismissed those examples on summary judgment as well. So really this case is probably being driven by concerns about the provenance of the inspiration material more than the similarity of the outputs.

Then again, this is where we’re at in copyright law. You can’t copy someone else’s photo, but you’re free to recreate the photo, unless the posing and technical qualities are too close to the original, in which case you can’t even do that. This case is actually pretty much a redux the Steinberg v. Columbia (the famous birds-eye view of 9th Avenue New Yorker cover case). So long as we cannot reliably distinguish between copyright protection for an artistic style (not protected by copyright law…in theory) and copyright protection for how that style is expressed in a particular work, cases like this will vex the courts.

Try the line-drawing exercise a different way: if you’re the lawyer on the set of Meire’s photo shoot, what do you tell the producers to do differently?

Finally, the court doesn’t mention whether Meire is indemnifying Rimowa (or vice versa), but this is a pretty interesting question. Did Rimowa bless Meire’s execution knowing the risks, in which case maybe it should accept the financial liability too? Or did Meire make a judgment call that might prove wrong, and will it be on the financial hook for that? If you’re negotiating an agreement between advertisers and ad agencies, this case is a good reminder that risk allocation provisions like the indemnity are not “just boilerplate.”