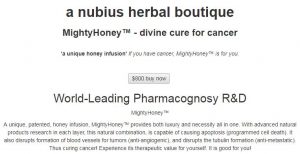 Plaintiff Abid claims he has developed “a systems biology empirical approach based on prophetic medicine.” He created a website, Mighty Honey, that provides information about “prophetic medicine”/”Arabic herbal medicine” which appears to be supplement-infused honey (the screenshot to the right is from March 30, 2017). He ran AdWords on cancer-related keywords with ad copy saying “divine cure for cancer.” This video purports to relate to the banned ads. The promoted URL now goes to Japanese spammers.

Google suspended the campaign because it violated Google’s pharmaceutical ad rules (presumably designed to reduce the odds that Google will have to pay another half-billion dollar fine in the future). Google gave Abid a half-dozen instructions of how to fix the ad, but Abid’s efforts never satisfied Google. Abid sued Google pro se, seeking (among other things) “$10 billion for violating his First Amendment rights, loss of business, and pain and suffering,” “an authorization to be allowed on [G]oogle for when people search for the cure for cancer,” and “the nullification of an $88 bill demanding payment.” (Pro se protip: if you win a $10B judgment, you can probably afford the $88 late payment).

Abid is not going to win either $1oB or even $88. The court rejects all of his arguments (with leave to amend for all but the 1983 claims):

1983 claim. “Plaintiff does not allege any facts suggesting Google is a government actor or was acting on behalf of the state.”

Sherman Act claim. “there are no facts showing Google sought to unreasonably restrain trade, let alone succeeded in doing so.”

Breach of contract. Google didn’t breach its AdWords contract by excluding Abid’s ads per its pharmaceutical ads policy (which is included in the AdWords “policies” document).

Deceptive Trade Practices Act. “Plaintiff does not identify any egregious or aggravating circumstances to support a UDTPA violation.”

Regarding the censorship advocates who seek to strip Google of editorial discretion to reject ads: I wonder if they are OK with Abid’s advertising? Because limiting Google’s discretion means we get more ads promoting cancer-curing honey.