With no further moves to make in Canada, Google sued in the US for “a declaratory judgment that the Canadian court’s order cannot be enforced in the United States and an order enjoining that enforcement.” Equustek did not make a proper appearance in the case, leaving Google’s request uncontested. On Thursday, the district court granted Google’s injunction request.

Google raised First Amendment, Section 230, and international comity objections to the Canadian court order. The district court only discusses Section 230. The court treats this as an easy Section 230 case:

Having found that Section 230 means Google is likely to prevail on the legal merits, the court grants Google’s requests because:

Google is harmed because the Canadian order restricts activity that Section 230 protects. In addition, the balance of equities favors Google because the injunction would deprive it of the benefits of U.S. federal law….

An injunction would also serve the public interest. Congress recognized that free speech on the internet would be severely restricted if websites were to face tort liability for hosting user-generated content….

The district court ruling is not surprising because it’s basically a default judgment. The real question is what, if anything, this court’s ruling means. The short answer is: I don’t know.

The most likely scenario is that Google will proffer this court ruling to the Canadian courts to demonstrate how the Canadian court order establishes a conflicts with the law of other countries. What happens after that isn’t clear to me. Equustek can raise challenges to Section 230 (which it didn’t do in the US court) in a renewed Canadian court proceeding, so the entire US law question could be relitigated there. Perhaps the US ruling will prompt Canadian courts to recognize the error of their prior rulings. Or perhaps Canadian courts to shrug their shoulders about what a US court says.

An unlikely scenario is that Equustek appeals this ruling to the Ninth Circuit. After all, they didn’t properly challenge the case yet, so why would they show up now?

In all of these circumstances, it’s unlikely that this US court ruling will be the final word in the matter.

And once we step away from trade secrets and look at other types of regulated content where the legal rules vary substantially by jurisdiction–say, pornography or defamation–the strategic stakes of this case become even clearer. If every plaintiff can go to a country with the most restrictive law and get a court ruling under that country’s laws that dictates what content is available across the globe, then the Internet of the future will reflect the most restrictive laws around the globe–a very different Internet than the Internet we love today.

This is not a hypothetical concern. The same policy questions are raised by Europe’s “right to be forgotten,” which lets EU residents scrub certain types of search results. Initially, Google offered to scrub RTBF-targeted search results in its EU indexes but not in other indexes. Then, under pressure from the EU, Google offered to filter the results seen by EU residents, even if they voluntarily access a non-EU search index (i.e., if an EU resident goes to Google.com, the results they see from Google.com will remove the RTBF-targeted links). France has taken the position that Google’s latest solution still isn’t good enough;; it wants Google to remove the targeted links globally, from all search indexes. In other words, France’s vision would allow countries with more restrictive laws to determine the content seen in countries where the links are legal under local law. 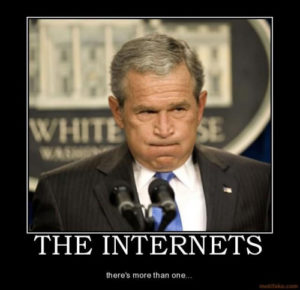 Even if the Canadian global delisting order and the France RTBF overreach ultimately fail, notice how far we’ve come from the circa-1990s global utopian vision of the Internet. The best-case outcome that’s still obtainable is that, due to variations in local law, the search indexes in different countries look different from each other. Indeed, most Internet companies now do localized versions of their service both for legal and non-legal (cultural and linguistic) reasons. Increasingly, the “Internet” in country A looks quite different from the “Internet” in countries B-Z. There is, in fact, no single “Internet” any more. We already live in a world with lots of different “Internets.” The social ramifications of the Internet’s fragmentation into the Internets remain to be seen.