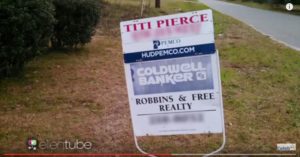 The Ellen Show, featuring Ellen DeGeneres, runs a periodic segment called “What’s Wrong with These Signs? Signs.” In Feb. 2016, the segment included a sign for “Nipple Convalescent Home” followed by the plaintiff’s real estate yard sign, displaying her name “TiTi Pierce” and phone number (another phone number on the sign was blurred out). Ellen pronounced the plaintiff’s name like “Titty” rather than “TeTe” and said “Sounds like she might have spent some time in that Nipple home, I don’t know.” Here’s the relevant part of the segment, though it has both numbers blurred:

Because the TV show didn’t blur both phone numbers, the plaintiff alleges she and her office got many phone calls/messages and texts making fun of her name. On Ellen’s Facebook page, the segment engendered comments the plaintiff said were “mostly vile and very hurtful to read.” Pierce’s lawsuit goes nowhere:

Defamation. The allegedly false statement was Ellen pronouncing her first name “Titty” instead of “TeTe.” Not surprisingly, the court dispatches this argument quickly:

The title of the segment itself implies that there is something incorrect or entertaining about the forthcoming signs, and indicates that DeGeneres’s statements should not be taken literally. Nor could DeGeneres’s pronunciation be proven to be demonstrably false. The letter “i” in the English language can be pronounced in several ways. While Plaintiff chooses to pronounce her name with “ē,” there is nothing “demonstrably false” in pronouncing it with “ĭ” as DeGeneres did. Nor would it have been defamatory to have pronounced Plaintiff’s name “tī-tī” or “tĭ- tĭ,” or any other possible permutation. That Plaintiff was insulted or embarrassed does not transform the different pronunciation into a false one.

If mispronounced names supported defamation claims, I would have not changed my name from Eric Schlachter.

Meme citation. In a footnote, the court says:

As an amusing meme points out, “If the GH sound in ENOUGH is pronounced “F‘, and the O in WOMEN makes the short “I” sound, and the TI in NATION is pronounce “SH‘, then the word GHOTI is pronounced like “FISH.” Welcome to the English language. http://ipa.mp3yab.ir/img/1.jpg

* It’s extremely hard to believe that “TiTi” has never experienced such juvenile distortions of her name before. Yet, incredibly, the complaint says “Ms. Pierce has lived her life as TiTi for 35 years and until Defendant’s malicious actions on February 22, 2016, no one has ever referred to her as ‘titty’.” That amazing claim makes me wish I could raise my kids wherever she grew up–obviously a community so much more respectful than every other community I’ve ever witnessed.

* The Ellen Show really doesn’t appeal to kids, and it’s mind-blowing that, in the 2010s, grown adults still pull juvenile pranks like prank-calling over the word “TiTi.”

* Why didn’t the Ellen Show blur both phone numbers? Obviously it’s trivially easy to find Pierce’s phone number; a search for her name listed her real estate profile, with her phone number, as the first result. Still, perhaps cretins who think it’s funny to make prank phone calls do so only because getting the phone number required zero effort. If the show producers took the step to blur out one number, why not both?

* The law doesn’t provide recourse for hurt feelings or embarrassment. In individual cases, that may be unfortunate, but overall, that’s a very good thing.