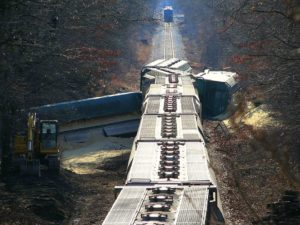 Section 230’s trainwreck of a year adds another derailment. MAKE. IT. STOP.

This case is a defamation-plus lawsuit over two stories, one published on Above the Law and the other by the Gawker property Jezebel. The Jezebel story described plaintiff Meanith Huon as an “acquitted rapist” and discussed his lawsuit against Above the Law. Our blog post on the district court ruling. On appeal, the court rejects most of Huon’s defamation claims, but I’ll focus on the allegation that an “anonymous” (really, pseudonymous) comment to the Jezebel story, by user “vikkitikkitavi”, was defamatory. The comment at issue:

She jumped out of a moving car, leaving her shoes and purse behind and ran barefoot through a cornfield and pounded on a stranger’s door to help her?

Fuck this “he’s been acquitted” noise. He’s a rapist alright, so we may as well call him one.

To me, vikkitikkitavi’s comment sounds like his/her opinion, i.e., the user expresses how he/she interprets the facts instead of disseminating new facts. Plus, while the appellation “rapist” has a literal meaning in the criminal law context, it also has many metaphorical or hyperbolic meanings that the speaker could be invoking. The court sees it otherwise:

This comment unequivocally accuses Huon of committing a crime (rape), and nothing in its context suggests it is more appropriately viewed as mere name-calling or stylistic exaggeration.

Even if vikkitikkitavi is legally at risk, surely Section 230 protects Gawker/Jezebel from liability for the user comment…right? NOPE. The complaint alleged that a Gawker staffer might have written the comment, and the court says this allegation is enough to survive Gawker’s motion to dismiss. As a bonus, some of Huon’s other state law claims are revived along with it.

We’ve seen many lawsuits where the complaint alleged that a defamatory message board post or article comment was authored by the site operator’s staff and therefore a Section 230 motion to dismiss should fail. Courts routinely, but not always, reject these allegations. Why did Huon’s allegations work better than these prior cases? The court tries to explain:

Rather than asserting one or two standalone factual allegations concerning Gawker’s control over comments, Huon’s fourth amended complaint devotes over four pages to detailing Gawker’s alleged activities. Critically, the complaint hints at why Gawker employees might have anonymously authored comments, alleging that increasing the defamatory nature of comments can increase traffic to Gawker’s websites, which can in turn enhance the attractiveness of Gawker’s commenting system for prospective advertisers. In doing so, the complaint quotes several passages from a Reuters article that explains precisely how Gawker was planning to “monetize” comments, and why advertisers might find this commenting system appealing.

The Gawker Defendants may well be correct in contending that none of Huon’s various allegations actually occurred, but this doesn’t mean that the allegations are so implausible as to warrant dismissal under Rule 12(b)(6). See Twombly, 550 U.S. at 555 (explaining that a complaint need only plead enough facts to “raise a right to relief above a speculative level, on the assumption that all the allegations in the complaint are true (even if doubtful in fact)” (footnote and citations omitted)); id. at 556 (“[A] well-pleaded complaint may proceed even if it strikes a savvy judge that actual proof of those facts is improbable, and that a recovery is very remote and unlikely.” (citation and internal quotation marks omitted)). Discovery is the proper tool for Huon to use to test the validity of his allegations, and if he is unable to marshal enough facts to support his claim the Gawker Defendants can move for summary judgment. Moreover, to the extent Gawker and other publishers are concerned that our ruling will result in a flood of frivolous lawsuits, we remind them that sanctions are available under Federal Rule of Civil Procedure 11 if it is determined that a plaintiff’s factual allegations were plead with improper purpose, are frivolous, or were known by plaintiff’s counsel to be lacking any factual basis.

How did such an obvious and easy Section 230 case go off the rails? I can think of at least three things:

* Some judges are so inclined to give plaintiffs their chance in court that they reject motions to dismiss when discovery possibly could reveal contrary facts, even when it’s clear from the complaint that the plaintiff will lose eventually. Sadly, Section 230 brings out this judicial impulse more than it should, and perhaps it influenced the Seventh Circuit here. Unfortunately, biasing towards plaintiffs at the motion-to-dismiss stage imposes real costs on defendants and society generally, and I’ve seen numerous judges undervalue these consequences.

* The judge expresses overconfidence that Rule 11 will adequately deter plaintiff overclaiming in complaints. I love Rule 11’s deterrence power in theory; too bad it’s not supported in practice. FWIW, I can’t recall a single Rule 11 sanction based on Section 230–can you?

* The appellate ruling’s biggest analytical defect: the court notes Huon’s allegations that Gawker employees authored “anonymous” comments, but the court did not cite any allegations that vikkitikkitavi’s specific comment was actually written by a Gawker staffer. To confirm this, I read through all 69 pages of Huon’s FOURTH amended complaint. The complaint references “vikkitikkitavi” only once (page 38). The “four pages” of discussions about Gawker’s comments appear to be on pages 32-36 of the complaint (paragraphs 111-122; also see 125). Read those pages to see if there’s anything more than innuendo that Gawker employees wrote comments generally; and nothing about vikkitikkitavi’s comment. I think it’s inadequate for the complaint to “hint” (the court’s words) at the possibility that some Jezebel comments may be written by staffers; that kind of speculation about who authored vikkitikkitavi’s comment–the only comment still at issue–is exactly what Twombly says isn’t allowed. (Plus, the complaint’s allegations about Gawker’s purported encouragement of staffer-authored comments struck me as limp. What did you think?). Given the disconnect between the allegations and the allegedly defamatory post, I think this ruling was intentionally hostile to Section 230 by letting a (low?) probabilistic allegation about comment authorship to overcome a Section 230 motion to dismiss.

The net effect: it’s apparently now open season on message board posts and story comments in the Seventh Circuit. Plaintiffs can drop hints and innuendo that the site operator wrote aonymous/pseudonymous comments and, if this opinion is followed, should advance to summary judgment. And if you think Rule 11 will slow that down, you’re living in a fantasy world.