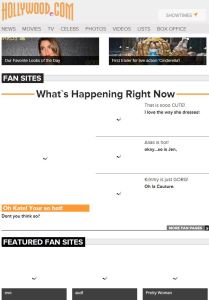 I’m not much of a gossip site reader, especially when I can’t get the damn page to load properly and there’s a painful “your” typo on the front screen

The plaintiffs own copyrights in celebrity photos. The defendants run the Hollywood.com “fan site network” with 1,500+ websites dedicated to celebrities, TV shows, etc. The complaint alleges that the entire fan site network is predicated on republishing stolen photos, and that the fan sites are run by “dummy webmasters” who do so without pay but under the network operator’s strict controls. The most recent ruling addresses the defendants’ motion to dismiss.

It’s almost 2015, and yes, we still struggle with explaining why web hosts aren’t directly liable for user-caused infringement. The plaintiffs’ core allegations in their complaint:

Defendants “are the registered owners of, and collectively operate” all of the websites that are part of the Fan Sites Network, and that “Plaintiffs’ photographs appear on Defendants’ websites” without authorization. Defendants “encourage the theft of content” by webmasters “under their direction and control,” and Defendants further “induce, cause and/or materially contribute to the dummy webmasters’ theft of Plaintiff’s [sic] photographs.” The complaint also says, in sum, that “Defendants’ entire business centers on profiting through a carefully crafted business model that attempts to use the Copyright laws in a manner not supported under the law to encourage the theft of content created by photographers by straw puppet proxies under their direction and control.”

To me, these sound like allegations of contributory infringement or possibly vicarious infringement. The court agrees, saying that these allegations do not support that the defendants engaged in “volitional” conduct sufficient to support a direct infringement claim.

Nevertheless, the court refuses to dismiss the direct copyright claim based on the following allegation:

Surprisingly, the court doesn’t probe this allegation. Did the defendants take any of these steps volitionally, or was everything just an automated processing of the user-submitted content? In other words, if all the defendants did to “reproduce” the works and create thumbnails was run the servers and associated software, this should have been equally barred by the lack-of-volition doctrine. I don’t understand why the court didn’t recognize that these allegations were functionally the same as the others.

Not surprisingly given the allegations, the contributory and vicarious infringement claims survive dismissal.

Regarding the 512(c) safe harbor, the court says:

Defendants may attempt to establish their eligibility for the DMCA safe harbor at a later point in the litigation, when they can present evidence in support of the defense. At this stage, however, Defendants’ premature attempt to qualify for the safe harbor is rejected.

Although that’s a correct statement of the law, it’s also a good example of 512’s miscalibration–especially if the defendants ultimately prevail on 512 grounds.