[Eric’s introduction: this guest blog post comes from Ed Cavazos of Bracewell & Giuliani in Austin, Texas, who I’ve known for 20 years. Ed was part of the first wave of lawyers and scholars focusing on Internet law, and he wrote the 1995 book Cyberspace and the Law: Your Rights and Duties in the On-Line World that was one of the leading early books on Internet Law (I still have it on my bookshelf). He has generously agreed to explain a potentially important ruling from Texas about anonymous online speech.]

The Texas Rules of Civil Procedure provide potential plaintiffs in Texas courts with the broadest power to conduct pre-suit discovery in the country.  Under Rule 202, a Texas court can authorize a pre-suit deposition to investigate a potential claim before an actual lawsuit is filed. Rule 202 has been used in numerous contexts, but plaintiffs increasingly have found Rule 202 to be the preferred path for investigating claims involving on-line activities, as it allows them to notice a deposition of an on-line service provider, hosting company or web site operator in order to gather info on users who are the actual targets of the investigation.  In many cases, Rule 202 has been invoked as a weapon by plaintiffs seeking to unmask the identity of anonymous users.

Recently, the tide turned.  In In re John Doe a/k/a “Trooper”, the Texas Supreme Court limited the reach of Rule 202 pre-suit depositions by holding that the trial court in a Rule 202 proceeding must have personal jurisdiction over not only the respondent (the party whose deposition is sought), but, if applicable, also over the subject(s) of the pre-suit investigation about whom the respondent is expected to be deposed.  This important ruling significantly narrows the scope of Rule 202 and substantially decreases the ability for an aggressive plaintiff to use Rule 202 to route around discovery limitations and other procedural safeguards that might protect the target of their investigation in Texas or in the target’s home state. 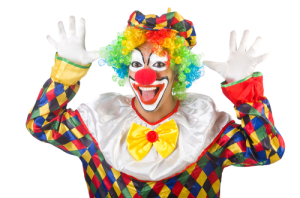 Who are you calling a clown? Photo credit: funny clown // ShutterStock

The case involves a blogger posting under the handle “the Trooper”, who authored a series of posts critical of Reynolds & Reynolds Co. and its CEO.  Reynolds & Reynolds, which develops and markets software for use by auto dealerships, is based in Ohio, but it has offices in Texas and the company’s CEO lives in Houston. The Trooper’s blog posts included inside information about the company’s “goings-on” in which the Trooper described the company’s products as “crap,” and disparaged the CEO by referring to him as “an ‘idiot,’ a ‘lunatic’, and a ‘crook’,” and comparing him to Bernie Madoff, Satan, and Bobo the Clown.

The CEO and the company filed a Rule 202 petition in Harris County district court that indicated their interest in investigating claims against the Trooper. In their petition, they sought to depose Google, which hosted the Trooper’s blog, and requested that Google disclose the name, address, and telephone number of the owner of the blog and the owner of the email address listed on the blog. The plaintiffs, with the district court’s approval, provided notice of the petition Rule 202 petition to the Trooper by sending it to the e-mail address listed on the blog.

Appearing anonymously through counsel as “John Doe,” the Trooper opposed and moved to quash the Rule 202 petition and filed a special appearance based on lack of personal jurisdiction, asserting his only contact with the State of Texas is that his blog is available to be read in the State.  Unpersuaded, the district court ordered Google’s deposition, and the Trooper sought mandamus relief in the court of appeals, which was denied, and then at the Supreme Court of Texas, setting the stage for the Court to weigh in on the issue for the first time.

The Court analyzed the history of pre-suit discovery powers in Texas, which dates back to 1879, and explained that pre-suit deposition requests have always required that the request be filed in a “proper court.”  The current rule authorizing pre-suit discovery, Rule 202, is no different, requiring that a pre-suit deposition petition be filed in a “proper court of any county” where venue of the anticipated suit may lie, if a suit is anticipated, or where the witness resides, if no suit is yet anticipated. See Tex. R. Civ. P. 202 (b). While the rule when enacted “certainly referred to venue,” the Court noted that implicitly a proper court must also possess subject-matter jurisdiction over the anticipated action. As Justice Hecht, writing for the majority explained, “[t]he rule cannot be used, for example, to investigate a potential federal antitrust suit or patent suit, which can be brought only in federal court.”   The Court went on to hold that, for two reasons, a proper court must also have personal jurisdiction over the potential defendant.

First, the Court stated that “[t]o allow discovery of a potential claim against a defendant over which the court would not have personal jurisdiction denies him the protection Texas procedure would otherwise afford” and “would circumvent the protections of Rule 120a” regarding special appearances because “the potential claimant could simply conduct discovery under Rule 202 before filing suit” even though such discovery would not be permitted in an actual lawsuit under Rule 120a.

Second, the Court stated that “[t]o allow a Rule 202 court to order discovery without personal jurisdiction over a potential defendant unreasonably expands the rule” because “the rule could be used by anyone in the world to investigate anyone else in the world against whom suit could be brought within the court’s subject-matter jurisdiction.” Though Texas courts have a history of being “so welcoming of litigation unrelated to the State that even the Supreme Court was forced to acknowledge” that Texas constituted itself the “world’s forum of final resort,” the Legislature has firmly disclaimed that objection. Therefore, the Court emphasized: “We will not interpret Rule 202 to make Texas the world’s inspector general.”

This case marks an important turning point in Texas law related to pre-suit discovery.  As mentioned earlier, Rule 202 can be a pretty potent weapon when investigating on-line activities, and plaintiffs have been increasingly turning to Texas courts and Rule 202 for that purpose. I recently handled a case for the coupon site RetailMeNot, where we successfully halted the efforts of a multi-level marketing company that was seeking a Rule 202 deposition as part of an investigation of how the company’s consultants and other third parties promote their products on-line, something that multi-level marketing business practices dictate they vigorously police.   eBay is actively appealing several recent adverse Texas trial court rulings involving similar facts; where the trial courts ruled in favor of multiple multi-level marketers’ pre-suit discovery efforts aimed at ascertaining identifying info of a large number of eBay sellers (as many as 15,000 users in one proceeding alone). With this new guidance from the Texas Supreme Court, these shotgun-style pre-suit investigations are much harder to conduct under Rule 202.

There is no doubt that the substantive rights of the users being investigated are clearly at stake in a Texas pre-suit discovery proceeding.  The stakes are even higher where the user is anonymous because allowing Rule 202 discovery of the user’s identity in a foreign jurisdiction could deprive the user of his or her rights to assert critical arguments, including First Amendment rights, in their home court.  Prior to this ruling, it wasn’t clear that the fact that Texas courts might not have personal jurisdiction over those users was a relevant factor.

The Texas Supreme Court has now made clear that a potential plaintiff under Rule 202 should bear the burden to plead allegations showing personal jurisdiction over both the proposed respondent and the ultimate subject of the investigation, the potential defendant.  With this hurdle, a potential plaintiff seeking to unmask the identity of anonymous users will likely have a more significant burden to obtain pre-suit discovery under Rule 202 by having to initially pleading allegations showing personal jurisdiction over an anonymous user who may not have minimum contacts, if any, to a particular forum in Texas.

This new ruling doesn’t mean that a Rule 202 petition could never be used against to investigate an anonymous target, of course. But the petitioner will have to take steps to establish that the anonymous target’s activities are sufficient to establish a prima facie case supporting personal jurisdiction. Anonymous blog posts alone won’t do it. If a Rule 202 petition for pre-suit discovery isn’t viable, the only remaining option for a plaintiff is actually filing a John Doe lawsuit naming the target as an defendant so that the plaintiff can then proceed to use the traditional means of discovery to learn the defendant’s identity. In such cases, a defendant who feel that they are improperly being hailed into court in Texas can move to dismiss for lack of personal jurisdiction, which will get the jurisdiction issue properly before the court.