What happens when a virtual world designer sues for “unauthorized” use of a virtual “island?” In late September, a New York district court denied summary judgment and cleared the way for a full trial on a virtual world copyright infringement case. [Eric’s note: I’ve held onto this so long that the parties mooted the trial by apparently settling the case in mid-December]. 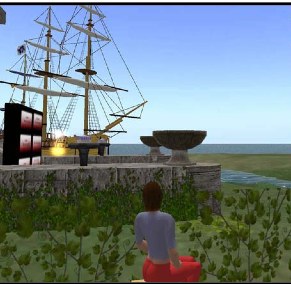 This bizarre case stemmed from a payment dispute for digital design services related to the virtual world “Second Life.” For those unaware with Second Life, the court described it as an “internet-based simulation in which users appear via digital characters called ‘avatars’ and interact with a computer-generated environment.”

The operators of Second Life (Linden Research, Inc.) sell parcels of virtual space called “islands” that essentially begin as blank slates that look like flat green rectangles. Second Life users can then change these virtual landscapes and populate their island with objects, buildings, and other things they create or purchase–a process called “terraforming.”

As a teacher, Defendant Cindy Sheehy saw Second Life as an educational opportunity and worked with her school’s technical staff to purchase three “islands” in Second Life that would later be “terraformed” into a virtual classroom for her students. She met Plaintiff Fred Fuchs at a Second Life convention in San Francisco, and ultimately hired his FireSabre consulting company to create digital content and terraform her virtual islands.

FireSabre terraformed a total of six islands for the defendants, referred to as “Ramapo Islands”:

Unfortunately, the parties didn’t nail down the specific details of this relationship. Sheehy claims that Fuchs was a “volunteer” for the First Three Islands, whereas Fuchs claims that he was an independent contractor hired to create the content for $10,000. But the two parties never executed a formal written contract, let alone discuss who owned the IP rights to this “Ramapo Islands” project.

The school district did eventually pay Fuchs $5,000 for the terraforming of the Second Three Islands, but the parties dispute whether that sum effectively purchased a copy of the content or merely a license of limited duration. Fed up in 2008, Fuchs submitted forty screenshots of the islands to the Copyright Office and registered his company’s digital artwork copyright. He then contacted the defendants and told them that the continued use of any of FireSabre’s Second Life content after August 1, 2008 would be “unlicensed.”

After that date came and went, FireSabre submitted several DMCA takedown requests to Linden Research. It also alleged that the defendants created a copy of the Second Life terraforming and uploaded it to servers for “OpenSim,” a different virtual world simulation. Ultimately, FireSabre sued for copyright infringement.

“Terraforming” is Copyrightable Under Section 102

The Defendants first attacked the validity of Firesabre’s terraforming copyright, arguing that terraforming should not qualify for copyright protection because it is not “fixed in any tangible medium of expression” within the meaning of § 102. The court did not buy this argument and compared the terraforming to digital images in video games:

Plaintiff’s designs existed on Linden’s data servers and were visible within Second Life for some period of time . . . clearly of more than “transitory duration.” The work was “sufficiently permanent . . . to permit it to be perceived” by the students who interacted with the Ramapo Islands simulation.

Ultimately, the court denied FireSabre summary judgment for both instances.

With respect to the First Three Islands, the court claimed that it had not been presented with enough information to give summary judgment on the question of substantial similarity.

As for the Second Three Islands, the dispute over authorization prevented summary judgment for FireSabre:

While Defendants have done a less-than-admirable job of teeing this issue up for the Court’s attention, they do assert that Sheehy believed the District had purchased the right to the continued use of the content Plaintiff had created for the Second Three Islands at her request.

Sheehy and the school district claimed that the $5,000 payment to FireSabre authorized them to continue using and displaying that content. The court gave considerable weight to this question, and noted that such an authorization could have been obtained by an implied license, under the first sale doctrine, or as a volunteered gift. The lack of evidence as to these three possibilities ultimately influenced the court to hold off on granting summary judgment.

Defendants Unsuccessful in Claiming Fair Use

In addition to the “authorization via implied license” defense, Sheehy and the defendants claimed that their continued use of the virtual islands constituted fair use. But one by one, the court laid out its rationale as to why each fair use factor weighed against a finding of fair use.

1) Purpose and Character of the Use: For this factor, the court relied on the distinction as described in Harper & Row:

[t]he crux of the profit/nonprofit distinction is not whether the sole motive of the use is monetary gain but whether the user stands to profit from exploitation of the copyrighted material without paying the customary price.

Despite acknowledging that “Defendant’s use of the material in question [was] primarily . . . for nonprofit educational purposes,” the court found that the allegations more closely resembled misappropriation because the defendants stood to gain from exploitation of the digital content without paying the customary price.

2) Nature of the Copyrighted Work: The court quickly weighed this favor against the defendants, noting that FireSabre’s digital artwork “is within the creative ‘core of intended copyright protection’ for which fair use is more difficult to establish.

4) Effects of the Use on the Market for or Value of the Work: This factor also weighed against fair use, as the court reasoned that “the market in which Defendants’ use of the material occurred is the same market that [FireSabre] is targeting in creating its works in the first place.” By continuing to use the content, the defendants chose not to avail themselves of the “ready . . . means to pay for the use” in the Second Life market.

Actually, the bigger lesson (too often ignored) is to make sure you have an agreement nailed down and in writing before beginning a time-intensive project. Judging by the earliest entries for FireSabre in the Internet Archives (circa 2007), it seems that the business was in its infant stages and thus less likely to have a firm process in place. But absent any documents outlining the relationship, the “authorization” question loomed heavily over this case and all but prevented summary judgment.

In fact, the major questions here were more factual related and less about the application of copyright law in virtual worlds. The defendants’ attack on copyrightability did not stick, nor did the fair use defense. It’s pretty clear that even educational uses of copyrighted material will not be protected when you’re using the entirety of the work and not paying for it.

As always, we must ask ourselves whether proceeding with a full trial is worth it.  Something tells me that when you’re knee-deep in litigation over a few virtual islands, the answer is no. Then again, I can only speak to this issue from a First Life perspective.