Book Review: “Unfair to Genius: The Strange and Litigious Career of Ira B. Arnstein”

Ira Arnstein is well-known to most IP professors as the named plaintiff in the copyright classic Arnstein v. Porter from 1946 (also see this case archive). The Second Circuit’s opinion is a landmark ruling that appears in numerous casebooks. The case clearly explains the differences between the “copying-in-fact” and “wrongful copying” elements of the plaintiff’s prima facie case, along with the applicable evidentiary standards for each element and the role of experts. The case’s facts then provide a law professor’s nirvana: a slippery slope of facts that might constitute “access” for purposes of the copying-in-fact prong, ranging from a song that sold a million copies to unpublished songs that were allegedly stolen from Arnstein’s ransacked apartment after “stooges” had been following him. Finally, the case defined “substantial similarity” for measuring wrongful copying (“whether defendant took from plaintiff’s works so much of what is pleasing to the ears of lay listeners”); a standard that got recapitulated in Learned Hand’s “ordinary observer” substantial similarity test in the Peter Pan case 15 years later. Although the opinion doesn’t make the background clear, a legal standard that focuses on what the lay listener hears effectively shut down the litigation cottage industry where plaintiffs asserted similarities between very short music segments–which oftentimes was not the product of copying but was instead just random coincidence attributable to the law of large numbers plus the composers’ conformance to standard music conventions. The standard also shut down the typical defense response of bringing in music experts to tell the jury how to evaluate those overlaps. The opinion is clinical and dispassionate, perhaps to a fault, but it remains a useful and efficient primer of copyright law even after nearly 70 years. 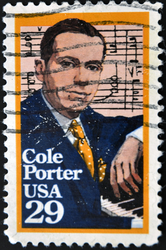 Though Arnstein won the Second Circuit ruling because the appellate court gave him the jury trial he wanted, the jury was not persuaded on remand. Furthermore, the opinion only hints at Arnstein’s possible mental illness indicated by his assertions that music legend Cole Porter was hiring “stooges” to follow him and ransack his apartment so Porter could steal his draft music. In light of this, it’s tempting to label Arnstein a copyright troll, perhaps the first, but that label is probably a little unfair. Arnstein was an accomplished musician with at least one big hit (“A Mother’s Prayer”) and possible mental illness.

Because I’ve taught the case so many times and the court’s description of Arnstein raises so many questions, I was elated when I saw an apparent biography of him, Unfair to Genius: The Strange and Litigious Career of Ira B. Arnstein [affiliate link] by Pennsylvania lawyer Gary Rosen, had been published. See the book’s website. As I’ve mentioned before, I rarely read books due to their length, especially for “fun,” but I immediately added this to my queue because I was excited to learn more about Arnstein’s story.

Sadly, this book reminded me why books are rarely worth my time. Like most other books, this book’s payoff didn’t justify my time investment. There was enough material to make a dynamite 15,000 word law review article; but at 258 pages, the book was probably five times as long as it should have been. I understand non-fiction books are frequently bloated, but I don’t understand why publishers do that to us, and I don’t understand why we as readers tolerate it.

Beyond the bloat, I had other objections to this book:

Hard to Follow. The book’s high-level organization was fine, but the presentation of material at the paragraph level baffled me. I had trouble following the explication from one paragraph to the next.

Pretentious Writing. I absolutely hate it when authors write pretentiously. I know what some of you are thinking (black pots and kettles), but I think this book’s pretentiousness was above-average, and certainly it was enough to detract from my enjoyment. Just about every page had some unnecessarily obscure word; I know some folks think that’s a sign of brilliant writing, but to me it felt like the author was showing off, and it degraded my reading comprehension. Worse, the book had innumerable factoid digressions (particularly about people whose lives intersected with Arnstein) that also seem designed to show off the author’s historical knowledge. Maybe other history scholars are impressed by lengthy gratuitous asides, but I found them tedious.

Misleading Titling. The book’s title promises a bio of Ira Arnstein, but the intro makes it clear that Arnstein’s story is just an entry point into the author’s broader musings about some key historical transitions in the music industry. Arnstein becomes a bit player in the second half of the book as the storyline devolves into a recount of ASCAP and its war with BMI. I wished the author either wrote a true biography of Arnstein, as the title promised, or used a more accurate title.

Missed Opportunity With Source Material. The book republishes some original source material, such as letters, some of which were pulled from the court records. These were fascinating, but I wish the author had included even more original source materials. Or, the author could have shared the source materials at the book’s website, or contributed them to the USC case archive. This book also would have benefited from an aural supplement, such as a CD with the songs on it, so I could hear and evaluate the songs as I read along. This also could have been done at the book’s website; even links to Spotify or iTunes would have been useful. [I recognize there are copyright limits on republishing some of this material, but there was plenty of material that was out of copyright or that would have easily qualified for fair use.]

To save you the tediousness of reading the book, here are a few highlights I learned from the book:

* Learned Hand was on the Second Circuit panel (he joined the majority).

* On remand from the Second Circuit, the jury took only 2 hours to rule against him on remand, and Porter got a $42,500 attorneys’ fee award to boot.

* Arnstein appealed the jury verdict, but the Second Circuit affirmed it in a 3 sentence opinion, and the US Supreme Court denied certiorari.

The book also provides some interesting background about Arnstein’s involvement in the Yiddish music community and how that ultimately became a career liability. The book doesn’t really provide a clear narrative on how or why Arnstein descended into madness, though perhaps that can’t be coherently explained.