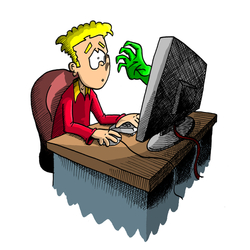 Mary Kay Beckman suffered an online dating nightmare.  She met Wade Mitchell Ridley on Match.com (a brand of $IACI).  They dated for a little over a week before she broke it off.  Three months later, Ridley “ambushed” Beckman at her home, repeatedly stabbing and kicking her.  Later, we learn that Ridley was suspected of previously murdering an ex-girlfriend.

Ridley was punished for his crimes against Beckman (he was sentenced to 28-70 years in jail).  But what about Match.com?  Should they also bear some responsibility for Ridley’s attack on Beckman?

Beckman thought so, and she sued Match.com.  Lawsuits against online dating sites tend to generate widespread press coverage going into detail about the victimization (see, e.g., the N.Y. Daily News story), as stories like Beckman’s prey on common fears about online dating.  Yet, as sympathetic as we might be to Beckman’s plight, her case was doomed from the outset due to 47 USC 230, the law that says websites aren’t liable for user content.  Last week, Beckman’s lawsuit against Match.com quietly met its inevitable denouement when the court dismissed it per 47 USC 230.

Beckman argued that she wasn’t suing Match.com for Ridley’s posts.  Instead, she said she was suing Match.com for failing to protect her from Ridley.  Prior plaintiffs have tried similar arguments to get around Section 230, with zero success.  For example, in Doe v. MySpace (5th Cir. 2008), underage girls on MySpace met predators who committed sexual crimes against the girls offline.  The girls argued that MySpace should have done more to protect them, but the court disagreed:

Their claims are barred by the CDA, notwithstanding their assertion that they only seek to hold MySpace liable for its failure to implement measures that would have prevented Julie Doe from communicating with Solis. Their allegations are merely another way of claiming that MySpace was liable for publishing the communications and they speak to MySpace’s role as a publisher of online third-party-generated content.

Citing 47 USC 230, Doe and another case, the Match.com court reaches a similar conclusion:

all of Match.com’s conduct must trace back to the publication of third-party user content or profiles. Match.com is a website that publishes dating profiles. There is nothing for Match.com to negligently misrepresent or negligently fail to warn about other than what a user of the website may find on another user’s profile on the website. Plaintiff may attempt to focus the alleged wrongdoing on Match.com, but what plaintiff is actually alleging is that she was eventually harmed because of third-party content published by Match.com on its website.

Coincidentally, the day before, a New York court independently reached a similar conclusion.  Benjamin Okeke found a user-submitted advertisement on Cars.com and agreed to buy the car from the seller.  Okeke wired money to a London bank with the understanding that the car would be shipped and the money held in escrow.  No car arrived, and no refund came either.

Okeke sued Cars.com, but his case went nowhere.  The court says that Section 230 protects Cars.com from liability for failing “to verify the legitimacy of advertisements and to promptly remove the fraudulent material once it was brought to its attention.”  The argument that Cars.com “should have employed greater safeguards to ward against fraudulent activity” also failed based on traditional legal doctrines (cite to the old Lunney case).

The Match.com and Cars.com opinions are just the latest rulings applying Section 230 to spirited and creative attempts to hold websites liable for its users’ misdeeds.  Indeed, I’ve never seen a successful “failure to warn” argument make any progress in working around Section 230.

Irrespective of lawsuits’ legal merits, incidents like this are not good publicity for Match.com and Cars.com. Experiences like these spook other members and undermine confidence in the sites–something that’s bad for business, even if no lawsuits are filed.  So even though Section 230 says the sites aren’t liable for their users’ actions, most branded websites typically care enough about their reputation that they will voluntarily undertake measures designed to protect their members.

[Disclosure note: I own a small number of shares in IACI.]