When Will We Give Up the Charade That Numbers Are Copyrightable?–National Football Scouting v. Rang

Individual numbers aren’t copyrightable, no matter how much work or judgment went into producing them. This proposition seems so obvious, I feel silly even mentioning it. A number is like a word in a sentence: it could be strung together with other elements into a copyrightable work, but standing alone, it’s too small to constitute “an original work of authorship.” And, of course, we’re always free to reuse any number we want in our own expression.

Yet, despite this common-sense baseline, we have a burgeoning body of caselaw indicating the opposite, including this ruling–one of the cleanest cases to date articulating the proposition that a single number (e.g., “42”) can, by itself, be copyrightable. The court nevertheless finds for the defendant on fair use–leaving this yucky ruling on the copyrightability of individual numbers hanging out there, just waiting for plaintiff misuse. 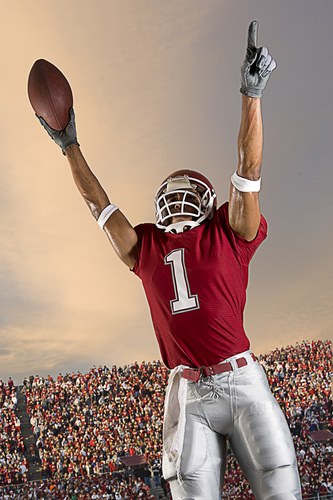 This case involves the rating of pro football prospects. NFS prepares a 6 page “scouting report” of each prospect, including “Player Grades,” “a numerical expression representing National’s opinion of the player’s likelihood of success in the NFL.” NFS provides these unpublished reports, under NDA, to 21 pro football teams at $75k/team, creating a $1.6M/year business line.

Rang blogs on the NFL draft at Sports Xchange. He wrote 8 stories about NFL prospects that referenced a total of 18 players’ NFS Player Grades. The opinion doesn’t explain how Rang got access to the NFS reports. NFS sued Rang and Sports Xchange for copyright infringement and trade secret misappropriation.

Citing CDN v. Kapes (one of my least favorite copyright cases of all time) and CCC v. Maclean Hunter, the court says flatly that “a numeric expression of a professional opinion can be copyrightable [because] National arrives at its grade through a weighing of subjective factors, such as personal character, leadership, and poise.”

Having reached that illogical conclusion, the court then contorts the fair use analysis to avoid the logical implications of its illogical conclusion. The court says the nature of the work favors the plaintiff because the grades were unpublished; the court doesn’t really consider the fact-ish nature of the works. It also says that the amount taken weighs in favor of Rang–even though he took 100% of each of the 18 grades–because he didn’t include the grade range (apparently important). The court summarizes its other thoughts about fair use:

Rang’s news articles transformed National’s copyrighted material into a commentary on prospective draftees. Rang did not use the Player Grades as a focal point of his article or create a whole-sale list of Player Grades; he used them only as a jumping off point to discuss Rang’s own impressions of the player and his draft

Still, the new isn’t all good for Rang. The court survives the trade secret misappropriation claim, rejecting Rang’s argument that opinions can’t be a trade secret.

For more on this topic, see, e.g., Justin Hughes, Created Facts and the Flawed Ontology of Copyright Law (I don’t agree with its normative point) and James Grimmelmann, Three Theories of Copyright in Ratings