This case involves the alleged counterfeiting of emoji beach balls on Amazon. It doesn’t get into emoji-specific IP issues and devolves into a garbled tangle over Amazon marketplace product catalog issues. Still, EMOJI LAW ALERT!!! 😲

Trademark Infringement and Counterfeiting. Claims based on Amazon acting as the retailer are sent to trial.

Copyright Infringement. It’s unclear if the plaintiff is complaining about the product shots or copyrights in the emoji designs themselves. The complaint is (deliberately?) waffly on this point. Para. 65 says “Kangaroo owns the copyright in: a. the design of the emoji beach balls (Ex. 1); and b. the photographs used to advertise the emoji beach balls (Ex 2).” This suggests that the plaintiff is claiming infringement of both the emoji designs and the product shots. However, the subsequent complaint allegations flip-flop in describing the exact works at issue.

The opinion focuses on the product shots. Amazon requires third parties to upload product shots, but the court nevertheless apparently treats this as a direct infringement claim. Unfortunately, the court never clearly lays out the applicable legal standard, so the opinion is inscrutable. The court says “the Plaintiff fails to refute the Defendant’s argument that it was a passive publisher of the protected materials that were uploaded by sellers,” but I’m not sure what copyright doctrine has a “passive publisher” defense (and another reminder that the term “passive publisher” is an obvious oxymoron). Instead, the court shifts to the DMCA 512 defense. The court says there are material disputes about several elements of the DMCA safe harbor, including what the NOCIs covered (was it the beach ball designs or the photos?) and how quickly Amazon responded to the NOCIs. Thus, the issue will go to trial as well.

Negligence. The plaintiff alleges that Amazon negligently merged its unique product code with its competitor’s code. The court says Amazon “had full control over the content displayed on its websites. The Defendant’s pleadings demonstrate that it took the responsibility of managing and cultivating the content provided to it.” It sounds like that should increase Amazon’s legal exposure, but instead the court breezily concludes “the Defendant was acting as an interactive computer service and the Plaintiff’s claims arise out of the Defendant’s course of action while acting as such.” It grants Amazon’s Section 230 motion.

Negligence Per Se. The plaintiff argued that selling counterfeits is negligence per se, but the court says there’s no precedent supporting that, so the claim fails.

All told, this case is going to trial on the trademark and copyright claims, which doesn’t sound like good news for Amazon. 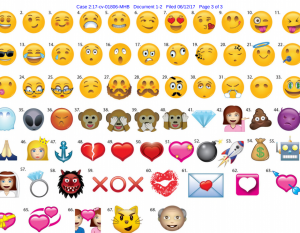 This ruling doesn’t engage with the interesting IP doctrinal issues underlying this case. The copyright issues are particularly pronounced. Are the plaintiff’s emoji designs original works of authorship sufficient to qualify for copyright ownership? The emoji designs shown in the complaint (see right) looked pretty straightforward, so they seem to run into many of the problems I’ve raised about ownership of individual emoji designs. If the copyright tussle is only about the product shots, that raises more straightforward, but still problematic, concerns about overexpansive copyright protection for product shots.

Still, the case facts highlight the potential for emoji trolling. Imagine an IP owner who obtains copyright and trademark registrations for emoji designs and then lobs many NOCIs into Amazon for a wide spectrum of products featuring emoji designs. What happens then?

For more on emoji IP law, see my papers Emojis and the Law and Emojis and Intellectual Property Law.