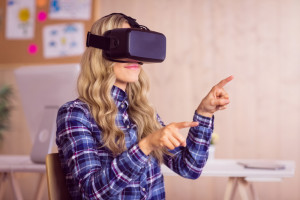 Palmer Luckey, who ultimately developed the much-hyped Oculus Rift, entered into an agreement with a company called “Total Recall”. Although it was not crystal clear, the agreement was technically with Thomas Seidl, one of the partners of Total Recall. The agreement required Luckey to develop a prototype based on feedback from Seidl.

The parties corresponded via email, and Seidl asked for confirmation from Luckey regarding exclusivity:

[j]ust so we are on the same page. With the initial payment . . . I would like excusive rights to your design unless we decide not to use it. I need to cover myself if we pay for development and then end up paying for a competitor.

[y]es we are on the same page here . . . I am sure we can put together a contract of some sort to finalize it all.

Seidl transferred $798 via PayPal. [Ouch. That Seidl made less than a thousand dollar payment for what turned into a much bigger problem for Luckey is a bummer. Perhaps it will be a minor blip on his radar screen in light of Oculus’s success, but still.]

A few months later, the parties entered into a “Nondisclosure, exclusivity and payments agreement”. It was between Seidl and Luckey and aimed at protecting confidential information, which it broadly defined as “all information or material that has or could have commercial value or other utility in the business in which Disclosing Party is engaged.” It had the standard carveouts from the definition of confidential information. It also included a non-disclosure and exclusivity provision:

Luckey developed a prototype and modified the prototype based on feedback from Seidl. Luckey never returned the modified prototype (Seidl does not allege asking for its return). Luckey went on to form Oculus, LLC, and develop Rift, which became a blockbuster on Kickstarter and was ultimately sold to Facebook for 8 figures.

Total Recall asserted a range of contract and tort claims. (The Total Recall partners appear to be involved in some internal dispute regarding their pursuit of this lawsuit, including separate litigation in Hawaii, but the court’s order did not focus on that.)

Does Total Recall Have Standing?: As the court notes in its opinion, the agreement was a disaster. One aspect of the agreement that was unclear was whether it was entered into on behalf of Total Recall or Seidl personally. Total Recall acknowledged it was not referenced specifically in the agreement but argued it was a third party beneficiary. The court says this is plausibly alleged because the agreement uses the neutral pronoun (“its”) in several instances, and this was sufficient to suggest that the parties intended “some entity beyond Seidl as an individual to benefit from the agreement”. The court also agrees that Total Recall’s alternate theory (that it was an undisclosed principal) is plausible. Again, in support of this ambiguity, the court points to vague and out-of-place language in the agreement, which noted that each party signed “on behalf of its authorized agent”. This language would be unnecessary if the parties merely entered into the agreement in their individual capacities.

Total Recall’s performance obligations: The exclusivity provision in the agreement (requiring Luckey to keep all details confidential) was in place unless Luckey received less than $10,000 in royalties from Total Recall. No amount of royalties were paid. Luckey argued that this was a contingency that was a precondition to exclusivity, but the court says that Total Recall plausibly alleged that its payment obligation was excused by Luckey’s breach, although “barely” so.

Whether the Exclusivity Violates the Bar on Non-Competes: Luckey also argued that the exclusivity provision violated California’s bar on non-competition restrictions. That law allows employers to impose such restrictions to the extent necessary to protect their proprietary information.[*] The agreement itself is unclear about what exactly Luckey was prohibited from doing. Specifically, due to its failure to define the term “head mounted displays,” it was unclear whether the restriction applied to head mounted displays generally, or the particular prototype that Luckey developed for Total Recall. The court construes the term narrowly to apply only to the prototype created for Total Recall, as opposed to a broad prohibition on developing similar devices, and thus avoids section 16600.

The court leaves Total Recall’s (narrowed) contract claim intact in the pleading stage, but it does dismiss the duty of good faith claim, saying it’s merely a re-packaged breach of contract claim.

Tort Claims: Total Recall did not assert a trade secret claim, but it did assert a slew of tort claims, including fraud, unfair competition, and conversion. The court says the bulk of these claims are superseded by California’s trade secret statute. The court canvasses the law and finds the authority requiring preeemption firmly established, but nevertheless finds it a “surprising development in California law”. The court says it’s constrained to follow it and thus concludes Total Recall cannot being tort claims based merely on misappropriation of information. Total Recall tried to characterize many of the claims as not information-based claims, but the court gets rid of them on the merits.

Finally, the court gets rid of the statutory and common law unfair competition claims. The common law claims fail because there’s no credible allegation of passing off. The statutory claims fail to the extent they are based on misappropriation of information. However, the court says Total Recall may amend to assert a property right-based UCL claim (even one that is based on a “property right in the allegedly misappropriated information”). The court says this type of theory may also advance a statutory UCL claim. However, to the extent the UCL claim is based on implicitly misleading statements regarding the true origin of the “Rift” product, this is disconnected from Total Recall’s true injury, which is misappropriation of information.

Practitioners, entrepreneurs, and law students can all benefit from reading the agreement and seeing its fallout.

The case involves a ton of interesting issues, most of which are precipitated by the agreement. The first of course is the internal wranglings between Seidl and his partner, which is sure to be exploited by defendants as a possible weakness. Second, the court notes that Total Recall did not assert any trade secret claims. It’s possible Total Recall looked at what was generally publicly known and felt that it could not credibly allege information that would qualify as a trade secret that was conveyed to Luckey. The parties appeared to acknowledge that much of the information regarding these types of headsets was in the “public domain,” but it’s unclear if this was the basis for Total Recall’s decision not to assert a trade secrets claim.

The interplay between the scope of exclusivity and the California bar on non-competition agreements is noteworthy. While there is a lot wrong with this agreement, this is one aspect of it that really stands out. There is no way someone who was even vaguely aware of the California rules would have been so careless about the scope of an exclusivity clause. In addition to the agreement’s failure to specify the scope of exclusivity, it also did not contain a choice of law clause. A choice of law clause could have tried to avoid California’s restrictions on non-competition clauses. Ultimately, Total Recall’s position squeaks by, but its contract claim is significantly limited in scope by the court’s interpretation of the exclusivity provision.

Judge Alsup expressed some skepticism on the lawsuit’s merits ultimately (both in the order itself and at the hearing.) It’s possible he sees this as a case that’s difficult to resolve at the pleadings stage because of the inherent factual disputes. In fact, he noted that he thought it was not appropriate for a Rule 12 motion, and in the future, required the parties to obtain permission from the court before filing such a motion. Suffice it to say, this is not typical. It will be interesting to see Oculus/Facebook’s approach and whether what rises to a nuisance level for settlement is sufficient to make Total Recall go away. My instinct is they won’t be too open to settling this, but that’s just based on observing its recent conduct with other litigants who try to shake the founder tree after a company grows to success. On the other hand, Quinn Emanuel represents Total Recall, so this gives the dispute an added Facebook/Winklevii sheen to it.

Like any early entrepreneur litigation story, there are some takeaways. First, Luckey and Seidl left a long trail of Skype conversations. This is probably unavoidable to some extent, but you can never hear often enough that notwithstanding the informality of such conversations, they can have legal effect. (See for example the CX Digital case.) Second, parties should steer clear of home-brewing an agreement or doing a cut-and-paste job. It is somewhat self-serving for lawyers to make this observation, but home-grown or pieced-together contracts rarely are sufficient. And, as this dispute shows, even an early prototype agreement can have significant effects on a company’s legal landscape.

[* Added: via email, a reader makes two good points regarding 16600. First, it’s an overstatement at best to say that an employer may impose restrictions “designed to protect an employer’s proprietary information”. Second, a choice of law clause may not be an effective way to circumvent 16600.]

The court opinion says that Seidl has not consented to this litigation. That means the real party in interest is Seidl’s business partner. So let’s assume for a moment that Seidl and Luckey had a solid “handshake deal,” in the sense that they both knew what they meant by the words and they meant the same thing. The introduction of a third party, with his own and possibly unrelated motivations, puts enormous pressure on such a handshake deal–perhaps more than this contract can bear.

It’s easy to see why the parties didn’t invest a lot in legal fees to paper this deal. It was a highly speculative deal with a hard cash component of less than $1k. Involving lawyers would have generated legal fees that dwarfed the guaranteed cash component of this deal. Yet, now knowing how the story turned out, those upfront legal fees would have been a great investment. When we talk about under-served legal needs, transactions with small guaranteed cash components and potentially large but highly speculative financial consequences are a great example of a much-felt need that traditional legal services simply can’t serve well. (As part of my mom’s estate, I’m working on one of these transactions right now, and I’m feeling this pain firsthand). If anyone can ever develop a cost-effective but personalized legal solution for these small dollar-but-big stakes transactions, they would make the world a much better place!!!

Venkat didn’t make any puns on the name Total Recall, but it’s hard for me to picture this case without thinking of the original 1990 movie (not the inferior remake), which had so many great images and lines that could be made topically appropriate to this dispute, such as: